On Utah State University campuses, cell phone communication is ubiquitous. While Aggies’ mobile calls and texts occasionally sprint through satellites orbiting the Earth, students aren’t trying to ring up contacts in outer space. That is, unless they're members of USU’s Get Away Special space research team.

“We’re designing a ‘cubesat’ — cube satellite — that will take pictures of requested locations from users on Earth,” says Landon Hillyard, undergraduate leader of the team’s project. “Our team is looking at the use of cell phone components to run the satellite. Doing so would free up valuable space in the satellite and save a good amount of money.”

The tiny orbiter, about four-inch square in size, will produce images similar to those of Google Earth, but they'll be on demand and up-to-date.

“If the requested coordinates fall in the satellite’s orbital path, the user, making the request through a website, will receive a newly capture image via e-mail,” Hillyard says.

The mechanical engineering student has additional plans to equip the satellite with Bluetooth radio devices that can be jettisoned into space and transmit data back to the orbiter and on to the USU GAS Team. With faculty members J.R. Dennison, physics professor, and Jan Sojka, head of USU's Department of Physics, Hillyard is determining if the tiny chips can withstand the punishing effects of a space environment. He's among 33 Aggie students who’ll present to legislators and guests at the 2012 Undergraduate Research Day on Utah’s Capitol Hill Jan. 24, in Salt Lake City.

“Bluetooth is a proprietary, open wireless technology standard designed to allow devices to exchange data over short distances,” he says. “Though the technology works on Earth, we don't yet know if these electronics, once exposed to the harsh environment beyond the Earth’s atmosphere, will perform as we expect them to.”

In the physics department’s test labs, Hillyard and his faculty mentors are subjecting the electronic chips to radiation, extreme temperatures and a vacuum chamber.

“By testing commercially available hardware in appropriate custom configurations, we'll be better able to ensure the reliability and quality of our cubesat’s experiments,” says the Smithfield, Utah, native, who graduated from Sky View High School in 2007.

Hillyard has some first-hand experience with the effects of space — or at least microgravity. The sophomore was one of seven Aggies who traveled to Houston’s Johnson Space Center in June 2011 to fly the team’s nucleate boiling experiment aboard NASA’s ‘Vomit Comet’ microgravity aircraft.

“Experiencing weightlessness in zero gravity was sensation overload,” he says. “It totally blew my mind, but I didn’t lose my lunch.”

Hillyard says the GAS team will likely contract with a private company to have the satellite carried into “LEO” (low Earth orbit) by a commercial rocket. The team hopes to launch the cubesat in fall 2013.

The project, which will cost about $100,000, including the ride into space, is primarily funded by the Elwell Get Away Special Program Assistance Fund for Utah State University. The fund was established in 2011 by USU alum Jim Elwell '82, and his wife, Diane. Elwell, a member of the GAS Team from 1977 to 1981, was among the students whose experiment flew aboard NASA’s Space Shuttle Columbia in 1982.

“We’re so grateful for the support of Jim and Diane Elwell, other GAS alumni and others who support our research,” Hillyard says. “There's nothing like the experience of building a complex experiment, dealing with setbacks, working with a team on a deadline, solving problems and actually seeing your ideas become reality.” 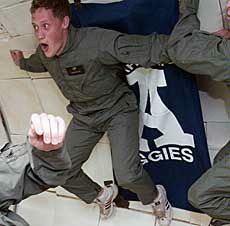 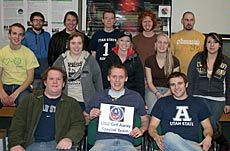