Six minutes into a crisis simulation — the first held by the Department of Journalism and Communication at Utah State University — students learn that the mayor’s son is dead, his body found at the local high school. Rumors of a zombie cow disease are spreading. They have nearly seven more hours of news twists, red herrings and breaking stories headed their way.

“You see how they’re crammed into rooms?” said journalism professor Matthew LaPlante, pointing to an office where 10 students sat elbow-to-elbow tapping on laptops. “That’s intentional. I want them to be tired, hot and sweaty at the end. There is nothing better than this, there is nothing worse.”

The simulation involved more than 50 JCOM students and volunteers from across the university, including the USU Police Department, the Department of Animal, Dairy & Veterinary Sciences, the Quinney College of Natural Resources and the Jon M. Huntsman School of Business.

Students were organized into television, radio, print and digital media outlets, a PR company, and a regional agricultural control board. Each group was set up with a fake Twitter handle, website and email address. They were given “loose marching orders,” to cover the events of the day with professionalism, LaPlante said.

The idea for the simulation developed out of a counterterrorism exercise run by the University of Utah’s law school that trains students to make critical decisions involving legal, ethical and moral dilemma while under stress. LaPlante’s first exposure to the simulation came while covering it as a national security reporter for The Salt Lake Tribune. During a follow up conversation with the professor who ran the event, LaPlante told him to include a press corps to participate in the future so law students learn how to operate when reporters are firing questions at them.

“What he needed was a measure to assess his students,” he said.

LaPlante returned for several years as an advisor for the law school simulation. Last year he brought several Utah State students to participate, including Kara Rindlisbacher, a public relations major.

“I made mistakes, and I learned as I watched others make mistakes,” she said. “I kept thinking this is the greatest educational experience I have ever had and I’ve been at Utah State four years. There is something wrong.”

Rindlisbacher pressed LaPlante to institute a similar exercise at Utah State. He gave her his blessing to move forward with planning. She texted Cari Forsgren, a rangeland management student, asking her how one could theoretically kill off a large portion of the cattle in Cache Valley.

“Give me ten minutes,” Forsgren responded.

The two spent three months writing the script, wrangling volunteers and coordinating logistics. It unfolded with only minor snafus such as students reporting real news stories in conjunction with the fictional storylines. However, 24 minutes into the simulation the first signs of frustration appeared. Students from the local paper paced the hallways, waiting for unknown sources to return their calls. Two floors down the public relations office fielded calls from demanding clients.

“This begins as a ‘normal’ day at the office, but then the phone starts ringing,” said PR professor Steve Reiher outside a cramped conference room. “These are little crisis that mushroom. None of [the students] have been in anything like it. I think what they learn is what to prioritize. One of the things we’ve been talking about in the department is having more crisis management because that is something many PR students will face.”

And crises never seem to hit when you’re ready for them. LaPlante, played the role of media publisher, mayor and simulation moderator — whatever was needed at the time. During a visit to the PR office he admonished the team for writing a press release for the mayor.

Down the hall, broadcast students calmly conduct interviews and package stories to stream stories over YouTube. The team is led by Troy Hunt, a communications professor at USU Eastern who drove from Price the night before with a student to participate.

“It’s a good opportunity for students to have real-world assignments, to have deadline pressure,” he said. “I can give them a story and say it’s due next week but that’s not real world.”

JCOM student Daniel Whitney Smith agrees. Last year he was a member of the press corps at the law school’s exercise, and the experience was jarring.

“It was really hard to multitask,” he said. “And I thought I was a good at multitasking.”

At the Utah State simulation on Halloween, y Smith played a shadow character — one of the few participants who knew the script ahead of time and operate as sources for the various storylines. He played a Hollywood executive and a bully who teased the mayor’s son. At least, that’s who he was before lunch. Smith, a writer for the Hard News Cafe, left to go cover the lieutenant governor debate on campus. He would return afterward to pick up his roles, and perhaps a few more.

“You can take all the journalism classes you want, but unless you experience drinking from the fire hose like this — where you have three phones ringing, and you’re taking to someone and trying to keep names straight while writing a story — you don’t know,” he said.

For professionals like Captain Steven Milne of the USU Police Department, the exercise was an opportunity to review official policies and practice what to do in an emergency. He has received media relations training at the FBI National Academy and serves as the department’s liaison to the press. He believes the USU simulation is a valuable tool for learning.

“In law enforcement we call it scenario-based training,” Milne said. “It was a good experience because it made you think ‘what can I release?’ If [JCOM] does this again I would like to bring some of sergeants up so they get experience taking calls from the media. You can read all the books you want, but [in a crisis] all things get thrown out the window.”

USU Department of Journalism and Communication 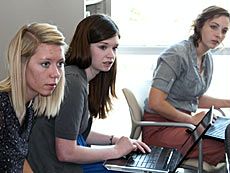 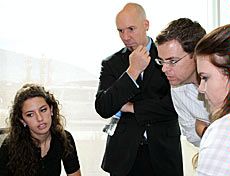 Assistant professor Matthew LaPlante (center) introduced USU journalism students to a crisis simulation last year at the U of U's law school. Several veterans of the simulation participated this year as shadow players. 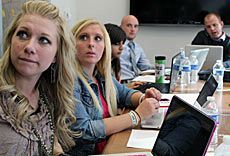