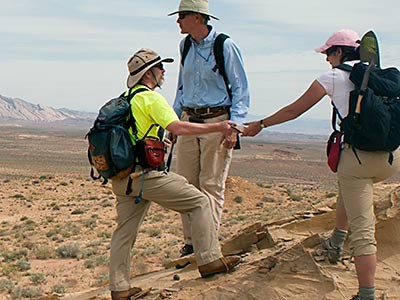 Effective carbon capture and storage or “CCS” in underground reservoirs is one possible way to meet ambitious climate change targets demanded by countries and international partnerships around the world. But are current technologies up to the task of securely and safely corralling buoyant carbon dioxide (CO2) for at least 10,000 years — the minimum time period required of most agreements?

Across the globe, several pilot projects exist for CCS , the process by which CO2 emissions are collected and injected into underground reservoirs, but upscaling and demonstrating the process will work over the long term is a topic of active research.

The team published findings in the July 28, 2016, edition of Nature Communications.The USU researchers’ participation in the study, funded by Royal Dutch Shell, was also supported by a U.S. Department of Energy Basic Energy Sciences Grant.

“Storing carbon dioxide underground is a challenge because CO2 is less dense than water, exerts upward pressure, corrodes surrounding rocks and escapes,” says Evans, a professor in USU’s Department of Geology. “Yet, natural carbon dioxide sequestration occurs and, with the study, we set out to discover the characteristics of areas where secure storage is possible.”

For several years, the team’s research has focused on an area of southeastern Utah, where Evans says a natural laboratory exists to study the long-term interactions between CO2, water and rocks. Located near a fault, the site’s natural and human-caused CO2 emissions can be studied from a minute to 400,000-year timescales. The current paper examines the result of a scientific drill hole in the area’s Carmel Formation, a sandstone caprock about five miles south of Green River, Utah.

Evans and Petrie helped to design the coordinate the drilling and students from USU participated in the coring and water sampling.

“Water samples were obtained from depth, and this sampling was tricky,” Evans says.

Shell’s Niko Kampman, the paper’s lead author, used a device lowered in the drilling hole to capture the water and dissolved CO2 and keep it at pressure until samples could be analyzed in laboratories in Europe.

“Coring and sampling rocks and fluids, while a natural pressure is pushing everything upwards into the hole, is very challenging,” Evans says. “But the team was ultimately successful.”

The team then used computer modeling of the chemistry measured in the water, gas and rock to determine the naturally altered caprock’s effectiveness in trapping carbon dioxide. They found it provided a barrier-forming zone in which minerals dissolve, react with carbon dioxide and precipitate and clog pores.

“These geochemical reactions occur at the nanopore level and create a very tight seal and, at the study site, retained carbon dioxide much longer than expected,” Evans says. “Our findings reveal important insights about the feasibility of storing carbon. Our work suggests that in natural systems, the CO2 may move very slowly in rocks and that effective seals are possible in some CCS scenarios.” 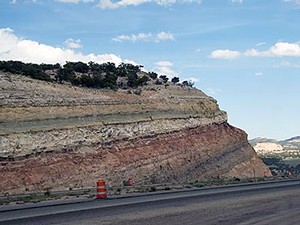 An outcrop of the Carmel Formation near Interstate-70 in the San Rafael Swell in southeastern Utah. USU geologists and collaborators probed the caprock to assess its ability to capture and store carbon. Photo by Elizabeth Petrie. 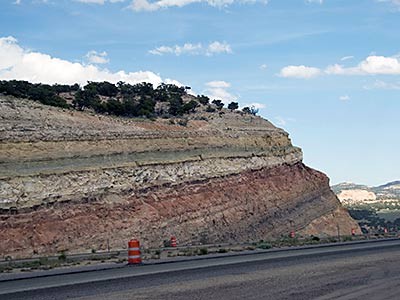