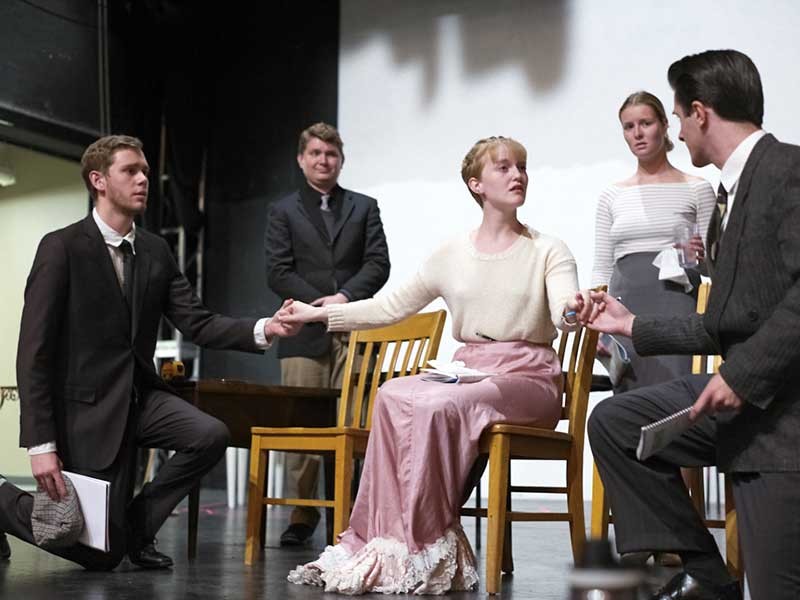 Light up the Sky by playwright Moss Hart runs at 7:30 p.m. November 30, December 1, 5-8 in the historic Caine Lyric Theatre in downtown Logan. There is an additional matinee December 8 at 2 p.m.

The satire revolves around a group of New York theater-folk opening a new show in Boston. As the opening night mood swings from optimistic camaraderie to terror of failure and angry recriminations, the friends start to turn against each other. It turns out, however, that in spite of the curious reception of the opening night audience, the reviews are favorable and the tables turn once again, but not before the playwright has decided that he is through with theater.

Acquainting the students with dramatic literature and films from the 40s and 50s has been one of the favorite parts of directing for Leslie Brott, head of the actor training program in the Caine College of the Arts (CCA).

“We so rarely get to intersect with that period in all its glamour and the type of comedy particular to that time,” Brott said. “This has been a splendid opportunity for the students to work their comic timing and learn how to present themselves at the height of 1940s fashion.”

Brott says working timing and operative words for jokes took some attention from the students since comedy works so differently now. Michael Shipley, voice and text coach for the show and assistant professor in the CCA, helped the students nail things down.

There is a nobility to the pursuit of theater, Brott says, and she hopes this play shows people that theater folks are as aware of their faults as their genius. The grace they afford others, as well as themselves, is an object lesson in generosity.

Brott says attending the show downtown at the Lyric is special because of the history and beauty of the theater.

“It’s the USU presence in the cultural center of town,” Brott said. “All of us feel a teensy bit of extra responsibility as we represent the university and the department in our offerings to the community.”

When asked why people should come see the show, Brott responded, “They’ll laugh. There’s no better reason than that.”

Tickets for Light up the Sky are $13 adults, $10 seniors/youth, $8 USU faculty/staff and free for USU students with ID. For more information or tickets, contact the CCA Box Office in room L101 of the Chase Fine Arts Center on USU’s campus, call 435-797-8022, or go online to cca.usu.edu.