When Daedalus constructed wings for himself and son Icarus to make their daring escape, his choice of materials was limited. And he knew the inherent risks of flying an apparatus crafted with wax too close to the sun.
Utah State University undergraduate Jennifer Albretsen has a much broader and sophisticated range of materials to choose from for NASA’s planned Solar Probe satellite, but her concern still centers on the impact of solar radiation. And whereas Daedalus was preparing for low altitude flight and a comparatively short hop from Crete to Sicily, the Solar Probe is expected to travel within three solar radii (3 RS) of the sun’s surface. In the course of its journey, the satellite will be exposed to large fluxes of light and charged particles from solar wind, as well as temperatures beyond what Daedalus could have imagined.
“NASA is trying to determine what materials could survive such a mission,” says Albretsen, an Undergraduate Research Fellow in physics who is entering her third year at Utah State and was named a 2007 Goldwater Scholar and a 2006-07 Governor’s Scholar.
Working with mentors J.R. Dennison, Physics Department professor, and graduate student Ryan Hoffmann in USU’s Materials Physics group, Albretsen subjects insulating ceramic materials, including aluminum oxide, barium zirconium phosphate and polyboron nitrate, to specific frequencies of light and measures the resultant current from electrons emitted by each material.
“We place samples in a vacuum chamber,” she says, indicating a large, round device that looks like a deep sea diving bell. “When light interacts with a surface, its energy is transmitted to embedded electrons. Often this forces the electrons out of the material, causing it to become charged.”
In addition to the Solar Probe, which Hoffmann says resembles “a giant flying ice cream cone,” the research trio and colleagues are investigating materials to construct NASA’s James Webb Space Telescope, planned successor to the Hubble.
A Wisconsin native, Albretsen, a National Merit Scholar, USU Presidential Scholar and Honors Fellow, chose Utah State because “I felt welcome, not like a number.”
“USU was small enough that I felt like I would receive personalized attention, yet large enough to provide interesting research opportunities,” she says.
Albretsen is enthusiastic about the projects that have come her way. “First of all, research is fun – it’s a different experience from sitting in a classroom,” she says. “You get a deeper understanding than from reading a textbook or doing homework.”
Dennison concurs. “Undergraduate research is incredibly valuable because it gives students a chance to see what they can accomplish with what they learn from books,” he says. “Classes are essential, but what makes science science is the thought process that goes with testing a hypothesis. You have to figure out what you don’t know. There’s no substitute for getting in the lab and making a lot of mistakes.”
As a graduate mentor, Hoffmann also sees the value of undergraduate research. “Unlike many colleges, USU offers many hands-on learning opportunities,” he says. “Not being involved in research is like going to a lecture about flying a plane without ever getting to pilot it.”
He adds that as undergrads are added to the research group, he benefits from the teaching experiences. “For me, bringing new scientists up to speed makes the whole process much clearer in my mind,” he says. “Going back and explaining the basics keeps me focused on the big picture and helps me avoid getting caught up in details.”
Dennison says pairing undergrads with graduate students, as well as faculty mentors, provides the former with a valuable orientation for graduate school. “From the start of their college years, students are introduced to the opportunities offered beyond undergraduate study.”
Related links:
NASA Solar Probe
NASA James Webb Space Telescope
USU Department of Physics
USU College of Science
Contact: J.R. Dennison [jr.dennison@usu.edu], 435-797-2936 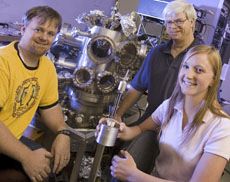 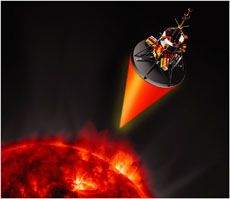 The primary scientific goal of NASA's planned Solar Probe mission is to understand how the Sun’s corona is heated and how solar wind is accelerated. Image courtesy of NASA.