Utah State University student Landon Hillyard believes Utah’s land and space grant university has the expertise and the will to launch the first student-built rocket into space.

A crazy idea? Yes. Hillyard estimates the launch vehicle would have to travel 130 miles straight up at 17,448 miles per hour to reach escape velocity, rotate and begin its orbit of the Earth.

“There’s no reason we can’t do it,” says the sophomore mechanical engineering major. “After all, Utah State has sent more student-built experiments into space than any other university in the world. USU’s Chimaera Rocket Team just won NASA’s University Student Launch Initiative competition for the third time. This is totally possible. We just need time, resources and determination. Would it be difficult? Yes, of course. Would it be worth it? I really think it would be.”

Necessity, it’s said, is the mother of invention. From 1982 to 2001, Utah State students sent 11 payloads containing more than 30 experiments into space aboard NASA shuttles through the space agency’s “Get Away Special” program. But NASA discontinued the program following the 2003 Columbia disaster. Since then, Aggies have scrambled to find other ways to get their research into space — or at least into microgravity.

During the past two years, USU’s Get Away Special Team has conducted successful heat transfer experiments aboard NASA-contracted microgravity jets — known as ‘vomit comets.’ Hillyard was a member of the 2011 microgravity team that flew on a plane and experienced weightlessness in zero gravity.

“It was sensation overload,” he says. “It totally blew my mind.”

But even more fun, Hillyard says, was the satisfaction of building a complex experiment, dealing with setbacks, solving problems, working with a team on a deadline and successfully capturing data.

“There were times it was terrifying and I wasn’t sure we were going to get the experiment to work in time,” he says. “But the whole project was an absolute blast.”

Aside from building their own rocket, options available to USU students include raising funds to send their experiments into space on commercial rockets or those of government entities.

“People are paying as much as $50,000 to put a kilogram into space,” Hillyard says. “I think USU could do this on its own. Let’s build our own ride.”

The 2007 graduate of Utah’s Sky View High School envisions an “LEO” (low Earth orbit) rocket powered by either solid or liquid fuel or both.

“The rocket would be fairly large depending on how we do it,” he says. “Unlike the smaller experiments we’ve done to date that we’ve taken right from the drawing board to finished hardware, we’d have to initially design the rocket on a computer. “

The project, Hillyard says, would involve students of varied skills from throughout the university.

“We’d need to draw on students in physics, math, chemistry, computer science — aerospace, mechanical, electrical and computer engineering,” he says. “We’d need expertise from students in management and marketing — it would be a huge effort, but worth it. The title of ‘First Orbital University’ wouldn’t come easy.”

“Sending people to the moon; it was an insane idea,” Dennison says. “But we had just enough technology, and the determination, to do it.”

Hillyard seems undaunted by the task ahead of him or the fact that, if he can sell his idea, he’ll likely have graduated and moved on before the project can be completed.

“That’s how science is — you can’t give up,” he says. “What I like most about USU building a rocket is that we’re actually trying to go into space, not just getting a grade.” 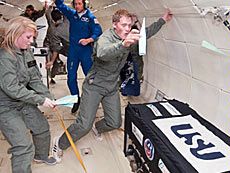 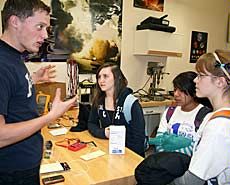