Multiple grazers — both wild and domestic — can coexist at home on the range and, under certain conditions, their presence actually benefits each other, says Utah State University researcher Johan du Toit.

In the Sept. 23, 2011, issue of the journal Science, du Toit offers a perspective paper supporting unorthodox findings published in the same issue by researchers Wilfred Odadi of Princeton University, Moses Karachi of Egerton University, Shaukat Abdulrazak of Kenya’s National Council for Science and Technology and Truman Young of the University of California, Davis.

While it’s true that cattle, sheep, goats and other livestock compete for sustenance with wild ungulates and sometimes exchange unwelcome diseases, du Toit says, mixed herds contribute to biodiversity and, under attentive management, can improve the quality of forage and promote rangeland conservation.

“Most large plant-eating mammals have evolved to live in multispecies assemblages,” says the professor and head of USU’s Department of Wildland Resources. “Through domestication and animal husbandry, however, humans have enabled a few species of livestock to dominate such assemblages.”

In varied cultures and landscapes throughout the world, du Toit says, herdsmen have viewed wildlife as a detriment to their livelihoods. A clue from Africa’s rangelands, however, challenges that conventional wisdom.

“The African savanna offers one of the world’s remaining ecosystems where a wide size-range of coexisting ungulates survive,” he says. “There, you can see the interaction between small, medium and large herbivores.”

At first glance, du Toit says, it appears the big boys, such as elephants, buffaloes and zebras, have the upper hand when bellying up to nature’s food trough. But look again and it becomes apparent the large herbivores effectively trample tall grasses that allow smaller species, including the gazelle and the diminutive steenbok, to access nutrient-rich plants and plant parts closer to the ground.

“This grazing succession, an example of ‘facilitation,’ means that one species’ feeding action improves the feeding efficiency of one or more coexisting species,” he says. “This process involves a sequence of ‘pull-push’ interactions in which the larger grazers pull the smaller species behind them, then get pushed ahead to graze down taller, coarser patches when the smaller species have nibbled out all the good stuff from shared grazing sites.”

In North America, effects of the last Ice Age that squeezed out giant mammals such as the mammoth, along with events of recent centuries that nearly wiped out bison, have made grazing succession less obvious. Still, du Toit is investigating cattle and bison interactions in Utah’s Henry Mountains to determine how, with adaptive management, concerns of competition might be balanced by the benefits of coexistence.

“Competitive interactions between livestock and wildlife, whether real or perceived, are a major source of human-wildlife conflict, and wildlife populations are inevitably on the losing side,” he says. “So, this research is a bold step in a new direction. Instead of viewing wildlife as adversaries, why not capitalize on the benefits of interactions between native and non-native herbivores to enhance biodiversity and animal production overall? The results could be a winning solution for all species.” 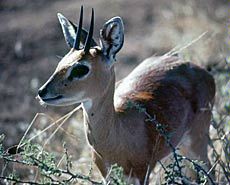 The tiny steenbok of Africa's savannas, along with its neighbors, offers a clue to how mixed herds of wild and domestic herbivores can contribute to biodiversity, says USU ecologist Johan du Toit. Photo courtesy and copyright of Johan du Toit. 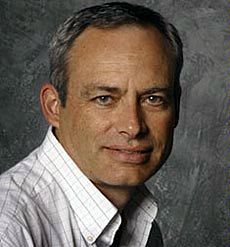 du Toit, professor and head of USU's Department of Wildland Resources, offers a perspective paper in the Sept. 23, 2011 issue of Science.