When Utah State University students and faculty first visited the Byana Mary Hill orphanage and school in Masaka, Uganda, in 2005, they were surprised to find children sleeping in buildings that were empty shells with dirt floors and no windows or doors. The school was detached from the electrical grid and had no lights, and children had to carry water from a contaminated marsh more than a half mile away.
Through a program called Engineers Without Borders, USU students and faculty set about to improve the conditions at the orphanage.
Professor Bill Grenney founded the Engineers Without Borders chapter at USU in 2004. Since then, the team has made five trips to Uganda. In addition, USU’s EWB chapter has established teams that have projects in Tibet, Mexico and Peru.
EWB is a national, non-profit, humanitarian organization that harnesses the power of professional and student engineers to complete low-tech, high-impact projects in developing countries. The national organization began in 2002.
“We provide sustainable improvements to the quality of life, education, economic development and infrastructure for disenfranchised children and the people who care for them,” Grenney said. “Just building physical infrastructure is not enough.”
As a testament to this philosophy, on its most recent trip to Uganda, the team installed knitting equipment and trained staff at the orphanage to knit sweaters for the children. The team also contracted with a welding shop operated by the Masaka Disabled Persons Association to build 20 triple-decker beds for a new dormitory, as well as to build window and door frames. Members also constructed a new dormitory for the girls.
The Uganda team’s work had a big impact on the children and staff at the orphanage, but it also made a difference for a student attending a university near the orphange. Maureen Kesaano was attending Makerere University and helped Grenney when he came to borrow surveying tools from the university. Kesaano also helped the team by serving as a guide and translator.
Kesaano was finishing her bachelor’s degree in civil engineering when Grenney suggested she think about pursuing a graduate degree at Utah State.
“I was impressed with the opportunity these students had to make a difference around the world and with how closely they worked with their professors,” Kesaano said. “After I looked into Utah State, I decided it would be a good place for me.”
Kesaano began her journey at USU in January 2009. She is working toward a master’s degree in environmental engineering and plans to return to Uganda after finishing her degree and gaining work experience. She hopes to get a job with the Ugandan Ministry of Water working on water development in rural areas. With this job, she would help villages and communities gain access to clean water resources.
Other EWB Projects:
Mexico: made improvements to the Gabriel House Orphanage and provided learning materials and toys for the children
Peru: worked with two communities, Chiclayo and Salkantay, to improve water systems, install solar-powered lights, and conduct other sustainable improvements
Projects Completed at the Orphanage in Uganda:
- Dug a well to provide clean water and built a pipeline from the well to the orphanage
- Wired classrooms and sleeping areas with lights
- Renovated and expanded the medical clinic
- Installed playground equipment and constructed volleyball, netball and tether ball courts
- Donated books and started a library
- Renovated a building for a kitchen and installed ovens
- Installed solar power, two roof rainwater catchment systems, concrete floors in the buildings, windows and doors in the classroom building and a solar pump to pump water to the tank
Student Experience
The EWB program is not just for engineers — students from various disciplines have traveled with the teams. For example, Ashley Karras, a broadcast journalism student, traveled to Uganda to film a short documentary. Proceeds raised money for the EWB program. The film was presented in spring 2006 as part of her senior project. Since graduating, Karras started her own business producing documentaries.
Writer: Annalisa Purser, (435) 797-1429, annalisa.purser@usu.edu
Contact: William Grenney, (435) 797-3186, w.grenney@gmail.com 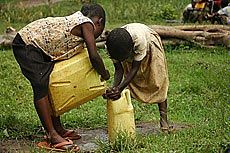 Children at the Byana Mary Hill orphanage and school in Masaka, Uganda, carried water form a contaminated marsh more than a half mile away. USU students and faculty dug a well, providing clean water and built a pipeline to the orphanage. 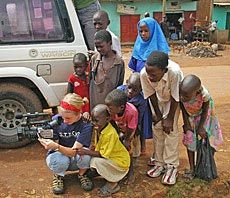 When Ashley Karras was a broadcast journalism student, she traveled to Uganda to film a documentary of the EWB projects. Her camera was a big hit with the children at the orphanage.