Every math teacher has heard it: “I’m not good at math.”

And they hear it not just from students, but from parents, too. “We’re not a ‘math family.’”

“Can you imagine a parent arriving at a parent-teacher conference and saying ‘We’re not a reading family’?” says Utah State University undergraduate Morgan Summers. “For some reason, it’s okay to give up and dismiss mathematics as something at which only a few can succeed.”

Summers, a USU Honors student who graduates in May 2011 with a degree in mathematics education and a minor in speech communications education, understands math phobia.

“I struggled with math in middle school and early high school and had severe test anxiety,” says Summers, who graduated from Utah’s Weber High School in 2007. “But I was determined to take advanced placement calculus.”

She was lucky. Her teacher knew how to assuage her fears and motivate Summers to excel in the class. The North Ogden native earned a stellar score of “5” on her AP exam and recognized her career dream.

“I wanted to be that kind of teacher,” Summers says. “I wanted to bust the myth that math is an unattainable, ‘hated’ thing.”

Fast forward to the present: the Aggie, who’s served as a mentor for USU’s Honors program, can’t wait to get to her student teaching assignment each day at Idaho’s Preston High School.

“I love my students and I love teaching,” she says.  “I’m teaching high schoolers that math is not a spectator sport. You have to do it to understand it and get better at it.”

Summers believes in the adage, “If you want to learn something, teach it.” During her USU career, she’s honed her math and teaching skills with fellow undergraduates. In 2009, she received the Athletics Department’s “Outstanding Tutor Award” for her years of work with USU’s student-athletes.

From faculty member Brian Bornholdt, she’s learned to consistently ask her students if they understand a concept before moving to the next topic.

“It’s a simple, but important, step,” she says. “One of the reasons students struggle is that they’re sometimes advanced to classes beyond their ability.”

As part of her Honors thesis, Summers completed a qualitative research project focused on issues determining middle and secondary mathematics placement. The project included a literature review as well as a case study she conducted of a local school district. Summers presented her findings at the 2011 Undergraduate Research Day on Utah’s Capitol Hill, the 2011 Utah Conference on Undergraduate Research and USU’s March 29 Student Showcase during the university’s 2011 Research Week. In the latter, she earned the top poster award in the physical sciences category.

“In my study, I found that students were placed in classes based primarily on standardized assessments given to them in the fifth and eighth grades,” she says. “Final decisions are made by guidance counselors, parents and students. The role of teachers in the decision process is minimized.”

Interestingly, Summers’ completion of her project, which included an analysis of the current system along with recommendations for improvement, coincided with Utah’s 2010 adoption of the Common Core Standards. The standards were developed in a multi-state effort coordinated by the National Governors Association Center for Best Practices and the Council of Chief State School Officers.

“The new standards agree with many of my recommendations,” she says. “They emphasize lesson plans that apply mathematical ways of thinking to real world issues and challenges and offer ways to ensure that students master content and skills at each grade level before moving on.”

“I’m torn because I don’t want to leave the classroom for grad school, but this is an opportunity I can’t pass up,” she says.

Her long-term career goal, she says, is to narrow the gap between research-based pedagogical practices and current practices in secondary mathematics classrooms.

“I plan to teach high school mathematics and be a fierce advocate for mathematics education research,” Summers says. 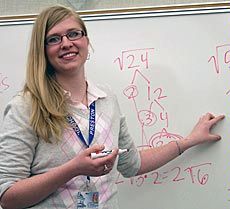 Undergrad researcher and Honors student Morgan Summers plans a career as a high school mathematics teacher. Her goal is to narrow the gap between research-based teaching practices and current classroom practices. 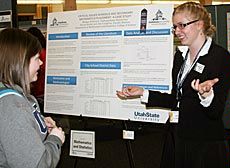