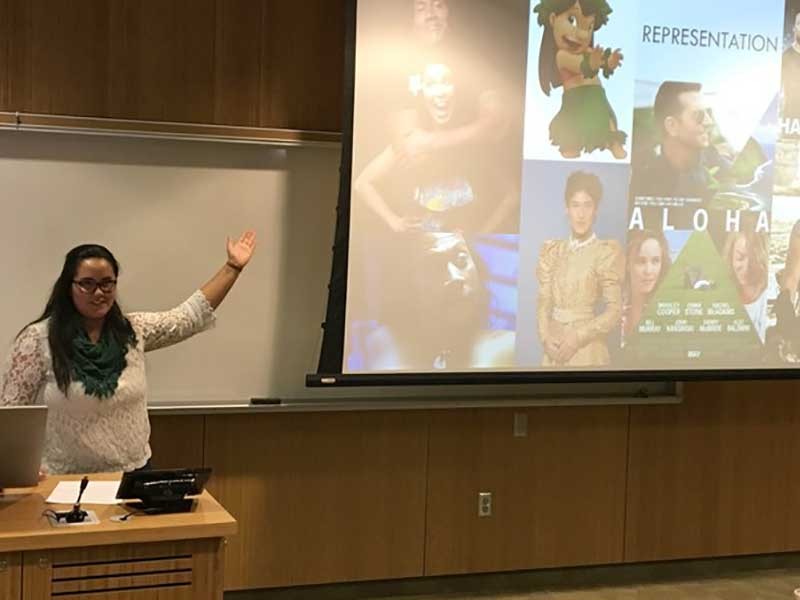 Senior Pono Suganuma, a JCOM major, discusses her research on depictions of Hawaiians in popular culture at a recent event. She'll be among presenters at the Journalism and Communication Research Colloquium on Feb. 21.

Students and faculty in Utah State University’s Journalism and Communication often perform their work behind a camera or keyboard.

Now the department is turning a spotlight on itself to showcase its own scholarly research in the first-ever Journalism and Communication Research Colloquium Wednesday, Feb. 22, beginning at 2 p.m.

“We are doing this in particular because Journalism and Communication is kind of an oddball department,” says the event’s organizer, Candi Carter Olson, an assistant professor of media and society. Whether print journalism, broadcasting or public relations is their focus, JCOM students learn to ask the hard questions and maintain integrity in an industry that is tilting more and more toward entertainment.

While the department is busy producing and disseminating the very same thing it studies — news reporting and presentation — it is often overlooked that its students and faculty are producing consistent and serious research, she said.

“We are very professional and academic, and we mix the two,” she said. “We want to bring people in and show them that JCOM are people you want to work with, that these are projects you’d want to do. Basically, come and play with us.”

Carter Olson said the research colloquium is an opportunity “to show off our students’ fascinating research projects that have an impact on real-world thinking.”

One JCOM senior, for instance, has documented the “white-washing” of her fellow Hawaiians in film and other media. Pono Suganuma will present her research on the many stereotypes of Hawaiians, said Carter Olson. “When we look at people in  films about Hawaii, we see the ‘hula girl’ or the ‘dumb Hawaiian.’ Pono is saying, ‘Our culture is richer and deeper than that,’” said Carter Olson.

Presenters include undergraduate students and JCOM faculty. An exhibit of posters describing each project will open at 2 p.m. in the first-floor atrium of AG RS Building. The open house exhibit continues to 4 p.m., when researchers will present brief summaries of their work in AG RS 101.

Professor Cathy Bullock and a team of eight students will present their analyses on the depiction of sexual assault in the news media. The students have documented thousands of news articles to make a database of public reactions and portrayals of this especially timely issue. “The potential impact is incredible,” said Carter Olson.

Other presentations include Carter Olson herself, whose award-winning research examines “the rise of the 20th-century newswoman,” and assistant professor Debra Jensen, whose students are learning all they can about the Special Olympics to prepare for their roles as public relations representatives this summer at the 2018 USA Games in Seattle.

Other faculty-student teams include those advised by Professor Tom Terry and Ellada Gamreklidze, a post-doctoral fellow; Matthew LaPlante, assistant professor, adventurer and science writer; Christopher Garff, videographer and adviser to ATV News; assistant professor of public relations Steve Reiher; and Professor Kim Hixon, who “crunched” more than 4,000 tweets to track public opinion during the 2016 presidential election, according to Carter Olson.

The event is free and open to the public.