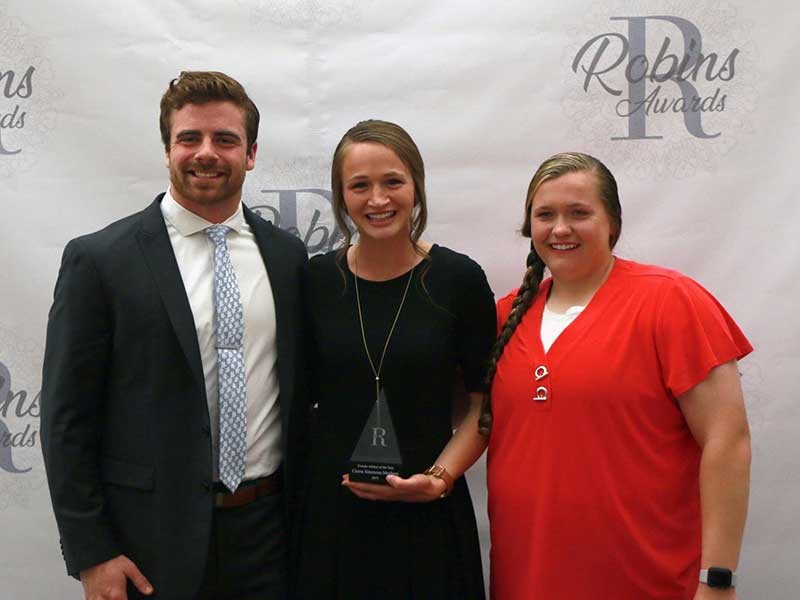 Merrill earned several individual accolades this season, as he was named AP honorable mention All-American, Mountain West Player of the Year, Mountain West Tournament MVP, first-team all-Mountain West, first-team all-district 17 by the National Association of Basketball Coaches, third-team All-American by Stadium, all-district VIII by the U.S. Basketball Writers Association and Mountain West Player of the Week. Merrill led the Aggies in scoring with 20.9 points per game, totaling 731 points this season, the fifth-most in school history and the 18th-most in the nation this year. It marked the first time since the 2007-08 season that a player has averaged more than 20 points a game for the Aggies.

Additionally, Merrill led USU with 147 assists, averaging 4.2 per game to rank fifth in the Mountain West, and finished the year ranked among the top-10 in the nation at the free throw line, shooting 90.9 percent at the charity stripe. Merrill was a big part of Utah State's success this year as the Aggies won both the Mountain West regular season and tournament championship, advanced to the NCAA Tournament and finished the year ranked in the top-25, wrapping up their 2018-19 campaign with 28 wins, the third-most in school history. Individually, Merrill is already among the best players in USU history, as he ranks in the top-10 in eight career statistics and just outside the top-10 in four others.

Simmons-Mecham earned all-region cross country honors, as she placed 17th in the six-kilometer race with a time of 20:25 at the NCAA Mountain Region Championship in Provo, Utah. The Soda Springs, Idaho native also represented the Aggies at the 2018 NCAA Cross Country National Championships, where she ran a six-kilometer time of 21:21.7. During the indoor track & field season, Simmons-Mecham broke her previous record in the 3,000-meter run, recording a time of 9:23.86 at the Washington Invitational. At the same meet, she ran in the distance medley relay, helping the team to a school-record time of 11:37.89, finishing 10th overall amongst some of the top distance programs in the country. Not only did Simmons-Mecham help break the indoor program record in the DMR, she did it again at the MW Indoor Championships, recording a time of 11:31.69.

Simmons-Mecham also finished first in the mile run at the Montana State dual meet, recording a time of 4:52.97. She later ran a personal-best 4:45.21 in the same event at the New Mexico-hosted Don Kirby Collegiate Elite Invitational. Simmons-Mecham became the first women's outdoor All-American on the track since 1999 when she finished eighth in the 3,000-meter steeplechase at the 2018 NCAA Track & Field National Championships, recording a school-record time of 9:49.53.

Finalists for the Athlete of the Year were selected by members of the athletics department. A selection committee over these categories then selected the winners. The awards were just two of 20 honors extended by the University during the evening, with students, faculty and staff all receiving recognition to their individual contributions to Utah State.

Steve Wiley, a long-time member of the Utah State athletic department, was posthumously given the Gerald R. Sherratt award, recognizing an individual member of the university who has displayed superior leadership skills and abilities, as well as unsurpassed dedication and service to others. Wiley passed away in December of 2018, but spent nearly 20 years driving USU football equipment across the country, beginning with a trip to New Mexico State on Oct. 21, 1995. His last road trip driving the equipment was in 2013. Volunteering his own time and personal vehicles, Wiley drove approximately 150,000 miles on more than 100 road trips.