Running a solvent business or household requires keeping an eye on what comes in and what goes out. Maintaining a healthy river involves a similar line of thinking, says Utah State University doctoral student and Water Fellow Susannah Erwin.

“It’s sort of like balancing a checkbook,” says Erwin, who recently returned to Logan following a third field research season on the Snake River in Wyoming’s Grand Teton National Park.
An S.J. and Jessie E. Quinney Foundation Ph.D. Fellowship recipient in USU’s Department of Watershed Sciences, Erwin studies channel change in the river caused primarily by water release schedules of the Jackson Lake Dam.
“The dam disrupts not just the flow of water but the movement of sediment,” she says. “This impacts the river’s physical template, which is the foundation for everything that lives in it.”
Built in stages starting in 1910, Jackson Lake Dam rises to a crest elevation of 6,777 feet. The dam enables storage of water in Jackson Lake beyond the glacial lake’s natural elevation. The additional water stored by the concrete and earthen structure irrigates farms throughout Idaho’s Snake River basin.
Erwin was honored for her research in fall 2007 by the National Park Service’s Rocky Mountains Cooperative Ecosystem Studies Unit. She was selected for the inaugural Student Award, established this year, which recognizes outstanding accomplishments made by students involved in RM-CESU projects.
Her work is part of series of ongoing projects led by faculty mentor Jack Schmidt, a geomorphologist and professor in Watershed Sciences. The research is funded by a variety of sources, including the NPS and the U.S. Geological Survey’s Northern Rockies Science Center.
“I’ve been thoroughly impressed by Susannah’s organizational and field skills that resulted in collection of unique data concerning gravel transport by the Snake River and its tributaries,” Schmidt says. “These data allow us to make recommendations to the National Park Service and the Bureau of Reclamation regarding how releases from Jackson Lake Dam can better maintain the health of the riverine ecosystem throughout Grand Teton National Park.”
Monitoring a river’s channel change is critical, Erwin says, because the balance of water and sediment determines the river’s form and characteristics of animal and plant habitats.
She and her team wield a 200-pound Toutle River sampler, deployed from a raft attached to a large steel cable strung across the river from bank to bank, to measure gravel transport rates and collect samples at various points in the river.
“It’s a heavy piece of equipment and the cable sometimes stretches as far as 300 feet,” Erwin says. “It’s physically challenging to take measurements and collect samples during high flow conditions.”
The bedload sampling technique is unique. “Only one other group in the nation uses the Toutle River sampler and they’re a California consulting firm that taught us how to use it,” she says.
What Erwin’s research reveals is that, given the current dam release schedule, the Snake River may not be capable of moving sediment supplied by tributaries downstream.
“This may mean that gravel is accumulating near some tributary mouths or other areas and could interfere with river navigation,” she says. “It also impacts vegetation, fish and other aquatic life.”
Damming a river doesn’t always result in sediment accumulation, she says. Glen Canyon Dam and the Hoover Dam on the Colorado River, for example, have caused the opposite effect – sediment deficit.
The main reason for this difference, Erwin says, is that Jackson Lake is a natural lake, whereas those Colorado River dams formed manmade reservoirs, namely Lake Powell and Lake Mead.
Between field seasons, Erwin returns to USU to analyze collected samples and create computer models of the river to determine the predicted impact of varied dam release schedules.
“With our data, we’ve created a sediment budget that can be tied to dam release schedules,” she says. “This helps the National Park Service determine what flows are necessary to move sediment and maintain equilibrium.”
During October 2007, Erwin presented her research at the annual RM-CESU Managers’ Meeting in Salt Lake City and afterward, traveled to Denver to present a poster at the annual meeting of the Geological Society of America.
“Our lab group is involved in several projects in support of the National Park Service’s efforts to manage complex, large river ecosystems,” says Schmidt, director of the USU-based Intermountain Center for River Rehabilitation and Restoration and the USU Water Initiative.
“We are privileged to work in some of the most beautiful, natural landscapes that our nation protects, and I am proud of the recognition gained by Susannah, her technicians and her supportive fellow grad students,” he says.
Contacts: Susannah Erwin, s.erwin@aggiemail.usu.edu; Jack Schmidt, jack.schmidt@usu.edu, 435-797-1791
Writer: Mary-Ann Muffoletto, maryann.muffoletto@usu.edu, 435-797-1429
January 2008 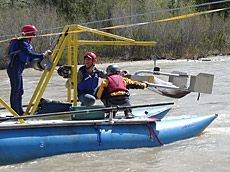 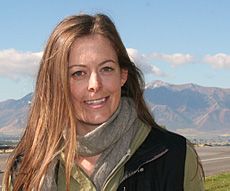