‘Mingi’—Journalists bring the story of Ethiopian Infanticide to USU

Story and photos by Heidi Hansen in The Hard News Café, Thursday, October 6, 2011

From Ethiopia to the USU [Utah State University] auditorium, two Utah journalists who recently took a risky journey to the Horn of Africa in effort to tell a heart-wrenching story of infanticide to the world stepped out Tuesday afternoon to share their experiences in global journalism.

Speakers Matthew LaPlante and Rick Egan opened the 17th season of the Journalism & Communication Department’s Morris Media and Society lecture series with “The Children of Ethiopia—From Cradle to Grave,” in which they reiterated what journalism is all about: telling the story.

Knowing better than to keep a roomful of journalism students waiting for the lede, new USU journalism professor LaPlante began with a synopsis of the story that drew him and Egan to cash in their vacation days and spend two weeks in Ethiopia reporting on a story they weren’t sure they could sell.

“‘Mingi’—it means the babies are cursed,” LaPlante begins, going on to explain that for three remote tribes in Ethiopia, death is the only cure for a mingi baby. “They are thrown out into crocodile-infested water, pushed out into the bush where they are killed and eaten by animals, or buried alive.”

According to Egan, a 26-year veteran staff photographer at the Salt Lake Tribune, mingi babies were identified if their top teeth come in before their bottom teeth, if they were conceived without the proper tribal ceremony, or if they are deformed or injured.

“It’s really a bizarre form of birth control,” Egan said. “We met a man who said, ‘We just weren’t ready to have children,’” to explain why he had buried three of his own infant mingi babies.

LaPlante said the tribes believed that if mingi babies weren’t killed, they would bring a curse of famine and sickness on the tribe. However, he said, some mingi babies are now being saved by tribal foster parents who converted to Christianity, or by a local orphanage.

“It’s about fear — they fear mingi like we fear terrorism,” said LaPlante, former national security reporter for the Salt Lake Tribune. “They believe famine will come, crops will die… They are afraid for the lives of everybody in the tribe.”

Drawing on his previous experience reporting on the Iraq war, LaPlante said when he met the mothers of mingi children, they seemed similar to mothers of fallen soldiers.

“They had something,” he said. “They were holding on to this idea that their children had died for the greater good…

“The women — the whole tribe — were heartsick, but they had done this for so long they had to believe in it,” he said. “Because if it’s not true, what have you done?”

But LaPlante and Egan also wondered what they had done, hopping on a plane to Africa to chase down a story their own editors said they didn’t want to publish. The Tribune had already done one Africa story for the year, LaPlante said, and that was enough.

“We didn’t know if anyone would buy it, or if they would buy it for enough,” he said, “but we felt it was important.”

Egan had previously traveled to Ethiopia, and already knew this was a story that needed to be told. LaPlante says he also was motivated in part by the journalistic drive for a scoop — the mingi story had not been been told.

Egan, who originally came to LaPlante with the idea, added that in all his Google searches he had found only one small paragraph on the subject in a National Geographic dated several years ago.

“This is one of the last places in the whole world where people live like this,” Egan said of the region in remote southern Ethiopia, where tribes live in traditional huts and follow customs hundreds of years old.

“Part of it was that we wanted to get there before it became Westernized,” he said. “They are building a road, and once the road gets there everything will change, they’ll all be wearing Nike’s and soccer jerseys.”

However, a road through these remote Ethiopian villages wouldn’t just mean tribe members will be wearing different attire — it’s also likely to bring an end to the practice of mingi, Egan said.

“So we think about that — is this pointless?” LaPlante said. “What good do we do? Is anything we do going to end mingi?”

During their two-week stint in Ethiopia last summer, LaPlante and Egan found that the story they were tracking appeared to want to be told.

“We repeatedly reported our way to a brick wall,” LaPlante said. “And then somebody would show up, like literally right out of the bush, and would take us in and help us. All our road blocks became blessings.”

And there were many roadblocks, logistical and ethical, to sharing the story, “Ethiopia’s River of Death” now published in Christianity Today. (See also “Growing in the Word,” Christianity Today, October 2011.)

LaPlante explained that having the Salt Lake Tribune say no to their story also meant they didn’t have to focus on the Utah angle, which was just as well because the Utahns who had run the rural Ethiopian orphanage that had been their focal point had pulled out. This meant that LaPlante and Egan were forced to connect with the Kara tribe directly, “which was where the real story was anyway.”

Egan said another more ethical roadblock was what to do about photography in a culture that expects to get paid when their picture is taken. “I knew we couldn’t use any photos that had been paid for, even a small amount of money,” he said.

But, again, out of the bush came their answer, a local guide named Chapi, who was trusted by the tribal people.

“We had incredible access because we had found the right translator and guide,” Egan said. “As long as we were with him, they let us shoot away.”

LaPlante said another reporting difficulty was that all interviews had to go through two layers of translation. “When that happens, how do you know you’re getting it right?” he said.

“When Matt [LaPlante] had a good quote, he made sure it was nailed down to the word,” Egan said. “The interviews were very long.”

Fortunately, there was one roadblock the reporting duo didn’t encounter: What would they do if the tribe tried to kill a mingi baby while they were there?

“I’m glad we didn’t have to find out,” LaPlante said. “I don’t know what we would have done — What’s our responsibility as journalists, as humans?”

For Egan, one thing that helps him cover these kinds of tragic, emotional issues is to find another way to help the community that doesn’t compromise journalistic values of observation and impartiality.

“When you cover something hard, you don’t know what to do,” Egan said. Journalists don’t want to become advocates, “but you can find something to help.”

That’s why he supports the Children of Ethiopia Education Fund, which raises funds to keep children, mainly girls, in private schools and off the streets, where they must beg or work as prostitutes to survive.

LaPlante said there is still a lot about the situation in Ethiopia that he struggles to understand.

“I wanted to tell as much as we could wrap our minds around,” LaPlante said, “and acknowledge that there’s a lot I still don’t know.”

Standing in front of Egan’s photographs of the Ethiopian tribal people who welcomed the two Utah journalists, LaPlante and Egan said they had accomplished their primary objective — to tell the world about the plight of a people.

“Rick thinks we were meant to tell this story,” LaPlante said. “I don’t know. But we found everything we needed, even found a buyer for the story.”

“This presentation is in the best traditions of journalism,” said JCOM department head Ted Pease. “Journalists and photojournalists go where the stories are, they put themselves at risk — or at least discomfort — to bring back stories about lands and peoples far away.

“Ethiopia is a long way from Utah — both geographically and attitudinally for most of us. But just because the suffering is far away doesn’t mean it’s not happening,” Pease said. “These are stories that we all need to hear.”

LaPlante, who has reported from Iraq, Pakistan, Afghanistan and other world hotspots, is no stranger to risk as a journalist.

“The advantage is not financial,” he said. “We will pay back out debts if we’re lucky, and maybe take our wives out to dinner — at McDonald’s.

“It’s missionary journalism, not a good business plan,” he said. “At the very least, we took a gamble, but we did it for the right reasons, and were rewarded for it.” 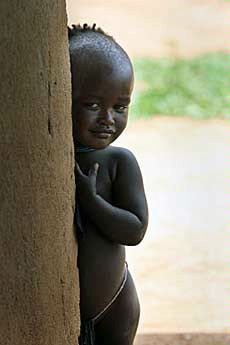 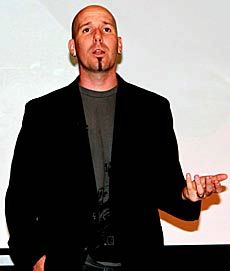 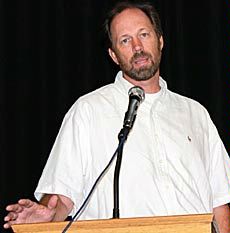