During the past several decades, upper Midwest state and local agencies have spent hundreds of millions of dollars on extraordinary conservation efforts to prevent the Upper Mississippi River from filling with mud, waste and excess nutrients. Yet the waterway, which winds through prime agricultural lands, has seen a ten-fold increase in sediment since the early 20th century.

That’s not the case, says Utah State University watershed scientist Patrick Belmont, who, with a team from multiple universities and research groups, recently completed a four-year study in the region.

“Conservation practices are decreasing agricultural soil erosion,” he says. “But the decreases are being offset by accelerated erosion of stream banks and bluffs.”

The cause? More water.

“While we haven’t reduced the amount of mud in the river, our study shows that the source of river sediment has profoundly shifted due to a significant increase in river discharge,” he says. “It’s just gotten wetter and we’re routing more water to the river more quickly than ever before.”

No one needs to remind the region’s riverfront residents of recent flooding events. Catastrophic floods in 1993 and 2008 floods caused economic losses in excess of one billion dollars. 2011 brought more misery as higher-than-normal snowpack melt and precipitation inundated farms and communities.

In addition to increased precipitation, water is being routed more quickly to the river via an ever-expanding network of underground drainage pipes.

“These changes in hydrology have increased the erosive power of the Mississippi and its tributaries,” he says.

Still, obvious changes in weather patterns aside, determining where the sediment is coming from and how much is transported is complicated, he says.

“Sediment is a natural part of rivers and identifying its sources and how it travels is tricky,” Belmont says. “But new tools that have become available in just the past several years allow us to track sediment as it moves through landscapes and rivers.”

To conduct the study, Belmont and his team employed geochemical fingerprinting along with a suite of geomorphic change -detection techniques, including both ground-based and aerial LiDAR (Light Detection and Ranging), a high-definition laser scanning tool used to map geologic surfaces.

“These tools allow us to examine areas at much higher resolution than has ever been possible,” he says. “We couldn’t have pulled off this study without this advanced technology.”

What the scientists are seeing, Belmont says, is increased erosion from stream banks and the river’s famous bluffs.

“This tells us we’re facing a new challenge in remediating nonpoint sediment pollution,” he says. “Management efforts must expand from soil erosion and agricultural practices to factors contributing to increased runoff.” 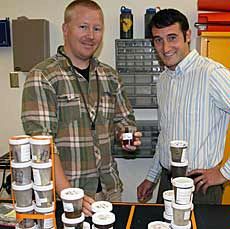 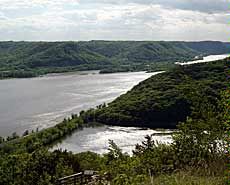