By Rebecca Holliday in The Hard News Café, Wednesday, May 2, 2012

Journalists from Mongolia visited Utah State University Friday [April 27] to tour the campus, meet with international program officials, and share ideas about education and journalism with faculty and students.

Mary Hubbard, vice provost for International Education, says this is one of a handful of exchanges the university has had with Mongolia. Other groups of businessmen and farmers have visited USU, “but this is the first group of journalists,” Hubbard said.

The 12 visitors included both members of the Mongolian Parliamentary Journalism Association, and representatives of newspapers and TV stations in Ulan Bator, the Mongolian capital — newspapers Undesnii Shuudan, Niigmiin Toli and Ardiin Erkh, and SBN TV, TV8 and MM, the Mongolian National Broadcasting Agency.

Journalism department head Ted Pease and a handful of students met with the delegates after a tour of the new Agriculture Building to discuss shared interests. The visitors were particularly interested in seeing JCOM students’ work, especially The Statesman, Aggie TV News, the Hard News Café and the new student-created Aggie BluePrint online magazine.

“Our goal is to give students basic tools and get them out there to cover news as soon as possible,” Pease told the Mongolian journalists through an interpreter.

Because the population of Mongolia is relatively small — approximately 2.8 million — broadcast journalists are highly recognized, the representatives said.

In Mongolia, many future journalists go to college for four years and major in fields other than journalism, such as politics or agriculture, and then go to school for an additional year to become certified as a journalist.

“After the year of formal press training they will be mostly concentrated on specific areas,” said Bolormaa Tserendash, a USU business master’s degree alumna who served as the main translator for the group.

Tserendash now works for the Human Resources Department for the Mongolian Parliament. After graduating from Utah State in December, she brought her group back to Utah learn and exchange information. The main goals for the trip were to try to build connections, exchange knowledge and expand their possibilities for future training.

Hubbard was excited to have the group visit.

“We want to promote more of what international students are doing,” she said.

Jigjidsuren Altangerel, a radio and TV journalist and head of the Mongolian Parliamentary Journalists Assn., said his group is dedicated to improving journalism in Mongolia, and especially interested in free expression and professional standards.

According to materials from the Mongolian Parliamentary Journalists Association, a main objective of the group is “to ensure transparency and openness in Parliament, [and] increase journalists’ participation in forming democratic parliament.”

“We want to protect rights and freedom of speech,” Tserendash said.

The group is also interested in “training and specialization of members.”

The Mongolians and USU students and faculty discussed key differences between journalism in Mongolia and the United States.

“Of course, we cannot say that all of our things are perfect,” Tserendash said.

In the past few years, the Mongolian media have received a lot of criticism, saying they work for private companies.

Mongolia adopted laws in 1992 allowing free press, and the Parliament is considering changes to improve press performance and to address criticisms.

“One main aspects they’re trying to change would be to establish a press council to ensure responsible journalism,” Tserendash said. “Nowadays there is a necessity for Mongolian journalists to be responsible.”

Altangerel and his fellow journalists told students and faculty that there is a need to train more journalists in political issues and social issues, as well as to learn more about business and agriculture.

“The main industry of Mongolia is agriculture so every journalist must have a full understanding of agriculture,” Tserendash said.

Other members of the group — few of whom spoke English — said English-language training also is a priority for Mongolian journalists.

USU business student Kjersten Adams spent time in Mongolia last year when she interned at House Bank, one of the major banks in Mongolia. Adams said the staple in the Mongolian diet is mutton.

“The climate is very harsh so they can’t grow many crops,” she said.

Furthermore, she said, “They don’t have chocolate chips in Mongolia,” so whenever her friends sent her “CARE packages,” she asked for chocolate.

Not surprising for a group of journalists, the visitors carried cameras, voice recorders, cell phones and microphones — and even a full TV news video camera wielded by a Mongolian network TV videographer, who was compiling reports on the group’s trip.

Altangerel and his colleagues said they hope to work with USU’s JCOM department in the future to learn and grow. Hubbard’s office will continue to work at coordinating future exchanges. 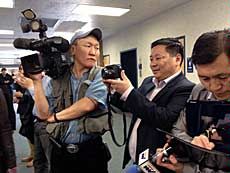 Members of a delegation of journalists from the Mongol capital of Ulan Bator conduct interviews on the USU campus. Mary Hubbard photo posted on the Hard News Café)