The Mountain West Conference announced it has reached agreement with ESPN to be a national television rights holder for Conference-controlled football and men’s basketball games. The agreement, which begins with the 2013-14 season, was announced by Burke Magnus, ESPN senior vice president, college sports and Craig Thompson, MW Commissioner. Financial terms of the agreement were not disclosed.

“The Mountain West looks forward to rejoining the ESPN networks beginning with our 15th season this fall,” said MW Commissioner Craig Thompson. “Coupled with CBS Sports Network, we anticipate tremendous national exposure over several outlets as the league continues its growth and development.”

“The Mountain West Conference and its member schools are committed to competitive excellence in intercollegiate athletics, and we think the strength of our programs on the courts and fields reflect this commitment,” said Dr. Anthony A. Frank, chair of the MW Board of Directors and president, Colorado State University. “We’re also committed to providing our student-athletes, alumni and fans national access to our competitions, and we believe this agreement with ESPN is a further step in ensuring this availability and increasing our visibility to fans of college athletics nation-wide.”

Between the two networks, up to 44 football and 56 men’s basketball games will be televised annually on their various platforms. The CBS Sports Network and ESPN agreements are scheduled to run concurrently through 2019-20.

The Mountain West is in the process of negotiating an agreement for the inaugural MW Football Championship Game with CBS Sports Network, and has retained rights to sell additional packages on the MW Digital Network and to regional/local carriers. 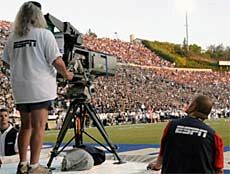 The Mountain West Conference announced it has reached agreement with ESPN to be a national television rights holder for Conference-controlled football and men's basketball games. (photo from Athletics wesbsite)