July 23 marked the 40th year that NASA’s LANDSAT satellites have circled the globe and tracked changes in the Earth’s surface. Phil Rasmussen, director of the Western Sustainable Agriculture Research & Education (SARE) Center and professor at Utah State University, was one of only three researchers invited to speak at a special Congressional briefing on Capitol Hill in Washington, D.C., to celebrate LANDSAT’s 40th anniversary.

Rasmussen is no stranger to melding earth-orbiting satellites with agriculture. While he was an Air Force officer trainee, Rasmussen witnessed the launch of LANDSAT-1 on July 23, 1972, from Launch Complex #2W at Vandenberg Air Force Base, California. His research and Extension career, which spans the lives of LANDSATS #1 through #7, includes projects as varied as predicting wheat yields in the former Soviet Union and others that helped farmers in the United States increase profits by prescribing precise applications of nitrogen in order to maximize protein in wheat. In addition, Rasmussen was named by NASA as the first Geospatial Extension Specialist in the nation — a tribute to his knowledge and skill in using Earth-observing satellites to benefit the nation’s farms and ranches.

“Data from the LANDSAT satellite series have had a profound effect on sustainable food production across the globe,” Rasmussen said at the Congressional briefing. “This, in turn, has allowed farmers, ranchers and land managers to select optimal management alternatives versus non-sustainable techniques that rob the planet of precious resources.”

He added that the LANDSAT Data Continuity Mission, set to be launched in February 2013, will bring even more precise information to agriculture through its visible, near-infrared and thermal-infrared imaging systems.

Rasmussen is a professor of soils science at USU and director of the Western SARE Center within the Department of Plants, Soils and Climate. The SARE Center has received more than $63.3 million in research funding over the past 15 years, with $4.15 million received in 2012.

Rasmussen supervises more than 275 research projects in Guam, the Commonwealth of Northern Mariana Islands, American Samoa and the Federated States of Micronesia — as well as the 13 western states. The Western SARE Center partners with farmers, ranchers, scientists and Extension professionals to extend research-based sustainable agricultural practices across the vast western region — stretching from Colorado to Guam. 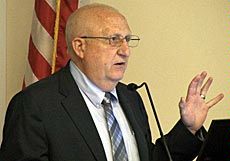 Phil Rasmussen, director of the Western SARE Center and professor at USU, was one of only three researchers invited to speak at a special Congressional briefing on Capitol Hill in Washington, D.C., to celebrate LANDSAT's 40th anniversary.