It’s been an historic year for the Utah State University club baseball team. Finishing in the conference in first place with an 11 and one record is a feat worth bragging about. Add to that, a USU first, winning the regional tournament. That’s a season worth decorating.

After taking the Northern Pacific – South regional title, the Aggie team moved on to the NCBA World Series played May 25-31 at Golden Park in Columbus, Ga.

There, the team’s dream season continued.

In its opening game, Utah State topped UC San Diego 9-3, moving on to face the University of Georgia with an outcome of 3-0. Next was Texas Tech University, and in an extra-innings outing Utah State came out on top 2-1. With that win, the Utah State team moved on to the championship match with Colorado State University.

Utah State University President Stan Albrecht is a baseball fan and has followed the exploits of team throughout the tournament.

“I want to congratulate the team for a great season and for once again putting USU in the national spotlight,” Albrecht said. “They’ve worked extremely hard all year, and the players have represented the university well, both on and off the field.” 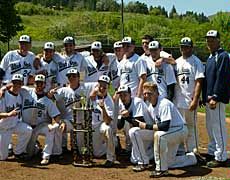