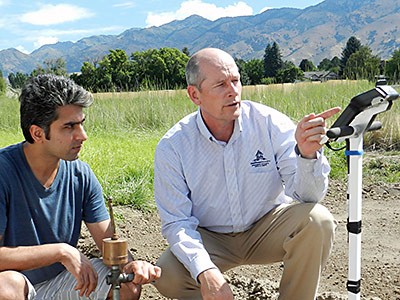 Drought continues to plague the Western United States and monitoring soil water is an important part of managing valuable water resources. A number of things can happen to water when it hits the topmost layer of soil. It may runoff and cause flooding, recharge aquifers, evaporate or go deeper into the soil until it’s used by plants, but exactly what happens depends on processes at and just below the soil’s surface that are not particularly well understood.

To better understand the fate of water at the soil surface, the National Science Foundation recently funded soils science professor Scott B. Jones at Utah State University with a $352,500 grant to expand his research on near-surface soil water monitoring. The project is a collaborative venture with Morteza Sadeghi at USU and Markus Tuller at the University of Arizona.

Because soil surface properties and processes vary across the landscape and over time, it is difficult to measure and understand them over large areas. Satellite images of the earth’s surface help monitor large-scale areas, but scientists need to connect ground-based measurements of root-zone water content with the surface image satellites produce.

“The top layer of soil, about one inch deep, has gotten little scientific attention to date, but the top inch of soil is all the satellites can really sense,” Jones said. “We need improved measurement technology and models to better calibrate satellite observations.”

The newly funded work aims to develop new sensing arrays, remote sensing tools and mathematical models that will measure and describe the properties of surface soils and builds on work Jones has done previously with support from the Utah Agricultural Experiment Station and other agencies. Newly developed technologies include models that employ shortwave infrared cameras and novel sensor arrays to detect water content that will help scientists understand the fate of water in near-surface soils at different temperatures and with varying soil texture.

“The goal is to improve satellite-based soil property and process monitoring to better manage soil water, especially in arid and semi-arid regions like ours where water is limited,” Jones said.