The world needs both nerds and poets.

Those who come up with ideas — as well as those who create environments where the ideas can flourish.

As an anthropologist, Jacob Freeman studies the dynamics of nerds and poets. And, he wants to understand the best brew of nerdiness and sensitivity to create a team that gets things done.

In other words, if you have a dose of Sheldon Cooper, the clueless genius in The Big Bang Theory, how much of steady and diplomatic Capt. Picard is necessary?

The most effective mix of personalities “is an open question,” said Freeman. “Why do some groups work very well under pressure in a changing environment and some groups don’t?”

“Let’s just put it this way,” he said, “if we already knew everything, the U.S. Army wouldn’t spend millions of dollars every year to figure out how to make groups better at working together.”

The ramifications of such knowledge are so far-reaching that the National Science Foundation has awarded Freeman, an assistant professor of anthropology in the College of Humanities and Social Science, a research grant of $466,000 over four years.

The NSF selects only a fraction of the thousands of proposals it receives, said Eric Reuther, professor of sociology and CHaSS’ associate dean for research. What makes Freeman’s research so important, he said, is our need “to address critical resource challenges.”

“This includes issues relevant to the state of Utah, such as managing water effectively as our population continues to grow and our snowpack tends to decline,” he said.

Freeman and his co-researchers form a bridge between disciplines. Freeman joins his anthropological perspective with that of psychology professor Thomas Coyle of the University of Texas San Antonio and Jacopo Baggio of USU’s Department of Environment and Society.

The researchers identify two types of intelligences. One, of course, is IQ. The other is less definable. They’ve termed this aspect “theory of mind.” It encompasses emotional and social intelligence, plus the ability “to track what other people are thinking and reason how they’re going to act in certain situations,” Freeman said.

To define the optimal mix of these different intelligences, they’ll conduct experiments over the next year and then create a model for best practices. This fall, some 500 students will take part in a collaborative video game where players must work cooperatively to earn enough food (that’s “tokens” in game talk).

“What we’re testing is their ability to continue to cooperate once we hit them with a challenge they weren’t expecting,” said Freeman. “Which is what real life is actually like.”

This game represents, in a nutshell, the “common-pool resource dilemma,” which scientists have long examined.

The classic example of this is an irrigation system. Freeman explains that if one farmer along the ditch is stealing water, he’s taking water from all the farmers.

In such a case, “there’s always a short-term incentive for an individual to cheat or to take more resources than they’re supposed to,” he said. “Although that benefits them in the short run, it makes everybody else mad, and it hurts the whole group in the long run.”

“Our idea is if you bring the nerds and poets together to create a diversity of intelligence capacities, they’ll react better and continue cooperating to build a team capacity that allows them all to be successful.” 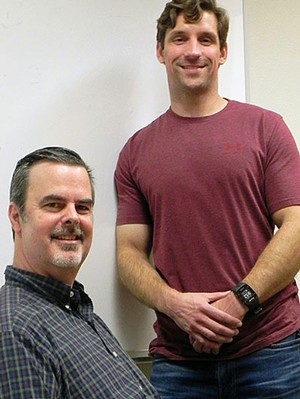 USU anthropologist Jacob Freeman (right) has received a grant from the National Science Foundation to research, over a four-year period, how different types of intelligences — social and IQ ? work best in changing environments. At left is Thomas Coyle, a psychology professor at the University of Texas San Antonio, who is co-principal investigator. The remaining member of the team is Jacopo Baggio, an assistant professor in USU's Environment and Society Department.