Peyton and Eli Manning, Jim and John Harbaugh, Pau and Marc Gassol, Venus and Serena Williams. When you ask someone to think of siblings in sports, these are likely some of the names that come to mind. However, ask anyone who knows anything about Utah State [University] volleyball, and the name they’ll give you? Neves.

First there was Chelsi. Coming off an All-American junior college career as a setter at Sheridan College, she came to Utah State in 2000 and quickly made herself known. That season, she set a then-school record of assists in a single season with 1,441, posting the number two mark in 2001 with 1,368 assists. She ended her Aggie career with 2,809 assists, securing her a spot among the best in USU history at the No. 3 spot on the Aggies’ career assists list, as well as one of the best two-year marks in program history. She is the only USU player with two marks on the top five single-season list and only one of two players among the top 10.

Next came Taubi. She played for the Aggies for two years in 2002 and 2003 as a defensive specialist. Following her successful start at Northwest Community College, she came to Logan to keep the Neves name well-represented. She set a new single-season digs record as a senior with 362 digs. While her then-school record has slid to No. 10 this season, she is now in her seventh season as an assistant coach for the Utah State program.

“Growing up watching Chelsi, she was amazing, and I always wanted to be just like her,” Taubi said. “She was so good. She dominated in high school and went on to be good at Sheridan and here.”

Ten years from the time Chelsi started playing at Utah State, Paige walked through the doors of the Dee Glen Smith Spectrum at Chelsi’s same position as setter. After a redshirt season, she jumped right in, anxious to carry on the legacy left by her sisters. While sharing a last name with her sisters, she has made her own name for herself, recently passing sister Chelsi for the No. 4 spot on the Aggies’ all-time assists list. Paige enters this weekend’s action with 2,892 assists.

“Growing up I would always come to games here and play up on the concourse and watch my older sisters play volleyball,” Paige said. “It was just always my dream to come and play here. They set the standard for what I could do, and I really looked up to them for that. I just wanted to be like them and do what they did.”

Just three of nine Neves siblings, the family hails from Otto, Wyo., an unincorporated town with a population of just 50 people.

“Otto is a farm town,” Paige said. “My grandpa is my closest neighbor, and he lives a half-mile away. There are a lot of animals, land and tractors. We have one stop sign and a park.”

Going to high school in nearby Burlington, the opportunities to advance an athletic career were slim. Without club ball or a big high school name, the Neves girls had to work that much harder to stand out and get their start.

“We come from such a small town and a small high school, that this is the dream you shoot for,” Chelsi said. “For all three of us to be able to live that dream is pretty neat.”

As Chelsi wrapped up her Utah State career, Taubi was just starting. The two lived together for a semester as Chelsi finished her degree. Now with Taubi still in Logan, Paige has moved in and they have extended the relationship to roommates.

“When I came here, it was fun because I got to live with Chelsi for one semester while she finished her degree” Taubi said. “She cooked for me. Paige lives with me now, but I don’t cook for her as much as Chelsi did. She kind of has to fend for herself. It”s really fun to have family around here.”

Though she was done playing by the time Taubi moved to Logan, Chelsi loved having her around and living with her.

“Of course you fight with your sisters, but you’re best friends,” Chelsi said. “To grow up and live with your best friend and support her while she’s playing was great. It was neat to see her grow and struggle and try to help her out. It’s an automatic support system.”

While there can be drawbacks to living with your sister and spending so much time together, around each other at practice and matches, Paige said there are more positives than anything.

“I can’t get away with anything,” Paige said. “She knows everything. The best part is just having part of my family right there and living with my best friend. Coming here I didn’t really know Taubi that well. She’s fun and outgoing and super easy to get along with. It makes it super easy to be so close.”

A challenging part of the nature of Paige and Taubi’s relationship has been finding the lines that need to be drawn between being a coach and player or just sisters.

“Sometimes I’m her sister, sometimes I’m her coach and sometimes I’m in between,” Taubi said. “It can get a little complicated. It’s fun watching her improve and be on this team. Grayson has done a good job of helping with that. He and Jeremiah mostly work with her and keep me out of the equation. That makes it a lot easier on me to keep it separate.”

The Aggie coaching staff of head coach Grayson DuBose and associate coach Jeremiah Larson, along with Taubi, has done its best to make those lines easy to find and easy to separate.

“That dynamic between Paige and Taubi was hard at first,” said DuBose. “It’s tough to find that line and where you need to draw it as a sister and as a coach. Taubi found that line really fast, and they’re able to be competitive in the gym and close at home. Taubi knew where she could coach her and where she just needed to put her arm around her and tell her she loves her.”

DuBose has gotten to know the Neves family, both as players and coaches, in addition to as people, in his capacities at Utah State. He was an assistant on the Aggies’' staff when Chelsi played and got to know Taubi through her and the family. Upon his return at the helm of the program in 2007, he brought Taubi on as an assistant. When Paige neared the end of her high school career, he knew it was a safe bet to bring her on.

“I remember Paige as a little kid, running around following her older sisters,” DuBose said. “It’s a wonderful family who I’ve known a long time. They’re good, hard-working kids and who they are as people really makes a difference. They’re similar players who are athletic, hard-working and dynamic. They’re strong leaders who don’t give into peer pressure, and they just do their thing. They have a nice core value system that they hold on to.”

Though Paige had to scrape her way to the top, she has put in countless hours and endless work to get to the point she’s at today.

“Since her redshirt year, she’s been in my office at least an hour a week trying to figure out how to be a setter,” DuBose said. “Her town and high school were so small that she didn’t have the experience other kids have. Her volleyball IQ needed to be raised and we found that was a good way to do it. It’s definitely an effort on her part.”

There have been definite benefits to Paige following her sisters and taking the opportunity to learn from them.

“Hopefully we’ve been a good example for her,” Chelsi said. “All three of us have so much in common that the age difference isn’t really there. We’ve gone through what she’s gone through before so we can give her a little bit of a head’s up. We can tell her so much, but she has to experience it for herself.”

With her sister’s spot in the record book broken, Paige is only seeking to grow more, something neither of her sisters are worried about her doing.

“I should have raised the bar a little bit higher for her. I made it too easy if she’s already breaking it,” Chelsi said. “She was born with a lot of talent. She was good in high school, but she still had to work at it. We were all rooting for her. She had to work harder and struggle to find out who she was and how good she could be. I think she’s awesome already, but I also think she has a lot more potential and she’s reaching it. It’s fun to come and watch her and see how much she’s improved.”

As she finishes her junior season, Paige has one more year to leave the impact of the Neves name that she wants to.

“My sisters left a good legacy behind,” Paige said. “They worked hard to set the mark for our name. That’s a huge reason why I got here. They put our name out there. I want people to remember that I was hard-working and dedicated. I want them to remember me as a good teammate.”

Utah State volleyball tickets are available by contacting the USU Ticket Office at the Dee Glen Smith Spectrum or by phone by calling 1-888-USTATE-1 or (435) 797-0305.

Fans who can’t make the match can follow along with "Watch Live" and "GameTracker" links at www.UtahStateAggies.com. 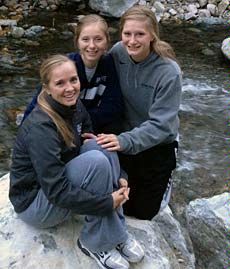