A little summer rain was not enough to dampen the spirits of people gathered to dedicate the new H. Paul and Mary Jane Rasmussen Teaching Garden at the Utah Botanical Center.
Adjacent to the UBC greenhouse, the garden is open to the public and will be used extensively by the more than 150 students working toward degrees in Utah State University’s off-campus horticulture program. The garden is named in honor of the Rasmussens’ ongoing support of the UBC and its mission to conduct research and to demonstrate wise use and preservation of plant and water resources.
As director of the Utah Agricultural Experiment Station, Paul Rasmussen has been involved with the UBC since its inception and worked on the original land acquisition. USU President Stan Albrecht told guests at the dedication that Rasmussen’s involvement with the UBC has gone beyond his professional stewardship.
“Paul and Mary Jane have put their hearts and souls into this place,” Albrecht said. “Their dedication goes beyond leadership. They have committed their energy and personal resources to supporting the mission of the botanical center and especially this teaching garden.”
The garden, designed by UBC Gardens Manager Anne Spranger, is a series of planting “islands” bordered by gravel pathways and framed on two ends by arbors. Dave Anderson, UBC associate director, said the islands were designed to be viewed from all sides and the plants they feature will be changed occasionally to fit changing needs. In addition to the garden’s more changeable elements, included are a collection of iris representing Dykes’ annual award winners since 1947 and daylilies moved from the university’s former botanical garden in Farmington.
Paul Rasmussen said the thing that has driven his and his wife’s support of the UBC is their belief in the importance and value of education. In addition to being home to the horticulture degree program, the UBC is the site of many Extension gardening classes and more than 4,000 children visited the center last year on field trips tied to the state’s science curriculum.
“Even early in our married life we believed that education would be very important for our children,” he said. “After they completed their educations we felt it was important for us to be able to help others. … We have also been supportive of the botanical center because it is now a green space and urban fishery in the midst of development that has been very rapid since the property was acquired.”
Related links:
Utah Botanical Center
Utah Agricultural Experiment Station
Utah State University Extension
Contact: Dave Anderson (435) 797-1984, dave.anderson@usu.edu 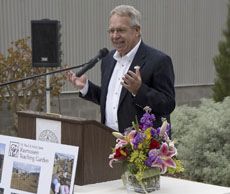 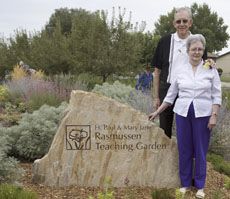 H. Paul and Mary Jane Rasmussen attended the garden dedication. They were honored for their support of the Utah Botanical Center and its educational mission. (Photo by Liz Lord, Agricultural Experiment Station.)