Harried Utah legislators struggling with budget cuts should take a lesson in level-headed decision making from Utah State University student researcher Michelle Kang. Faced with a rapidly deflating one-person raft in the middle of a lake, Kang says she “quickly began prioritizing which valuable scientific instruments to save.”
The watershed and earth sciences major decided to chance opening the raft’s air valve and was able to blow air into the craft fast enough to avoid sinking. She managed to complete her measurements and return to shore — unscathed — with all of her equipment and data intact.
“Sometimes, in the heat of crisis, you have to be creative,” says Kang, one of 33 Aggie students who presented at the Jan. 29 Undergraduate Research Day on Capitol Hill in Salt Lake City.
The raft snafu wasn’t the undergraduate’s first tangle with adversity in the field. Kang, who spent the past two summers studying high mountain lakes in Idaho’s Sawtooth Mountains, can recount a number of tales about the non-scientific challenges of field research. From hiking for hours to remote sites, sharing a one-bathroom cabin with 20 fellow researchers and encountering lightning while floating in a metal boat to getting slathered with mud while trying to free a stuck vehicle from snow-melted muck, Kang has learned the value of perseverance.
Her role model, she says, is her faculty mentor Wayne Wurtsbaugh, professor in USU’s Department of Watershed Sciences.
“He is so patient,” says Kang of Wurtsbaugh. “I’ve learned so much from him — mostly by watching how he deals with difficult situations.”
Beyond handling the perils of field work, Kang says Wurtsbaugh guided her in developing the analytical skills needed in her research and schoolwork. Participation in meetings for her mentor’s National Science Foundation-funded study of mountain watersheds offered a close-up view of the intense planning, cooperation and coordination needed to carry out a successful research project.
“So much effort goes into the project before the research even starts.” Kang says. “I could see how decisions are made and how different opinions and perspectives have to be considered as plans come together. I watched how scientists from varied disciplines deal with disagreements. It was a very interesting process.”
The study, which commenced in 2005, is a joint effort between Wurtsbaugh and Michelle Baker, associate professor in USU’s Biology Department. It explores nutrient retention and ecosystem stability in mountain aquatic ecosystems.
During Kang’s first summer with the project in 2007, she investigated the impact of wind on nutrient fluxes in lake sediment. In 2008, she studied the interactions between several mountain lakes and their watersheds.
“Lakes are frequently studied as individual units,” she says. “But the degree of watershed complexity above them may also be an important factor influencing their overall health and stability. We took a landscape approach to determine how activities upstream impacted activities downstream.”
Each day during the field season, Kang piled view tubes, pumps, bottles, a thermometer and monitoring equipment, along with anchor ropes, food and water into a raft and took varied measurements and samples at colorfully named research sites. Yellow Belly, Bull Trout, Redfish and Hell Roaring lakes were among her destinations.
“Our research approach, which looks at lakes as part of the greater watershed, yielded new, important perspectives on how nutrients influence aquatic life and how pollutants move through ecosystems,” Kang says. “Looking at the big picture offers new challenges and new questions for continued study.”
Related links:
USU Department of Watershed Sciences
USU College of Natural Resources
Contact: Michelle Kang, m.kang@aggiemail.usu.edu
Contact: Wayne Wurtsbaugh (435) 797-2584, wayne.wurtsbaugh@usu.edu
Writer: Mary-Ann Muffoletto (435) 797-3517, maryann.muffoletto@usu.edu 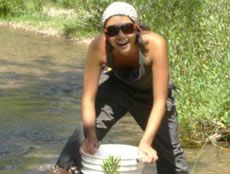 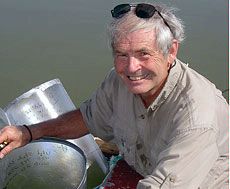