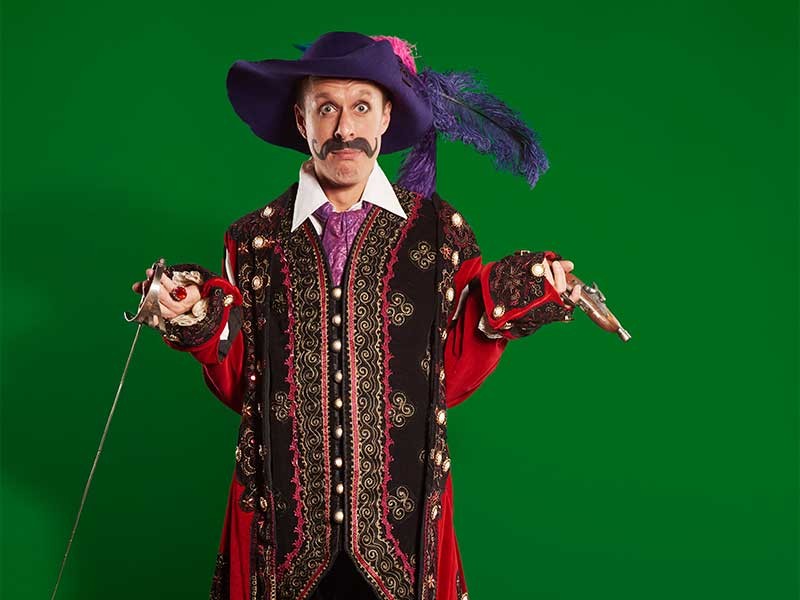 Matt Mueller as Black Stache in USU Lyric Rep's production of "Peter and the Starcatcher."

The Lyric Repertory Company at Utah State University brings audiences Peter and the Starcatcher by Rick Elice, music by Wayne Barker, based on the novel by Dave Barry and Ridley Pearson, opening June 22 at the historic Caine Lyric Theatre.

This Tony Award-winning play brings to life the swashbuckling story of a young, lost boy named Peter. Explore the depths of greed and despair and the bonds of friendship, duty and love as Peter and his mates meet the fearsome pirate, Black Stache, on a ship bound for adventure.

“Peter and the Starcatcher is a show I’ve wanted to produce for a long time,” Richie Call, co-artistic director of the Lyric Rep, said. “I love the book, and I love the play adaptation. In addition to producing it, I’ve always wanted to be in it. I’m so excited to play Smee this summer.”

Directed by Quinn Mattfeld, who has acting credits including NBC’s “The Blacklist” and the first national tour of Matilda! The Musical and directing credits include the Utah Shakespeare Festival and Severson Theatre, the show will entertain adults and children alike.

“I’m thrilled to get to do the show with Quinn Mattfeld directing,” Call said. “For a long time, Quinn has been one of my favorite actors. I had the pleasure of working with him on three shows at Utah Shakespeare Festival last summer, and I was giddy at the thought of him joining us at Lyric Rep. Quinn was one of the first actors in the world to play Black Stache. I’m so excited for him to bring his unique brand of creativity, energy and enthusiasm to our production.”

Opening June 22, Peter and the Starcatcher runs on select dates through August 4. Also part of this Lyric Rep season is Sense & Sensibility, Grey Gardens and Macbeth.