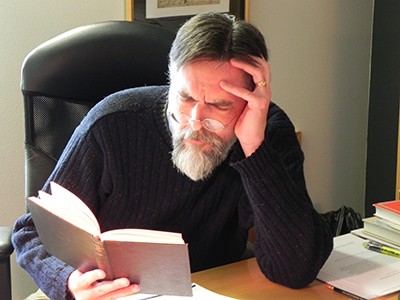 Philosophy professor Charlie Huenemann loves thick books full of big ideas. He's also finding success in the digital stream - that is, Amazon – where he breaks down those ideas into accessible, entertaining ebooks.

That statement’s author, philosopher Rene Descartes, has obviously never struggled through a college philosophy class. Or tried to read Nietzsche.

Philosophy is demanding, says philosophy professor Charlie Huenemann. It begins with the seemingly simple questions we all ask — “What’s real?” or “Am I just a speck of dust in the universe?”

“Of course,” says Huenemann, “things get complicated quickly — because life gets complicated.”

We spend our lives skipping across puddles, restricted by time and inclination, simply splashing about. But philosophy is a deep dive many of us don’t have time to bother with. Unfortunately.

Even Nietzsche is ready to hand out guilt: “The doer alone learneth.”

Huenemann’s new venture makes philosophy, not necessarily easier, but definitely more accessible to those of us who seek to learneth.

He’s an expert on philosophic thought of the Enlightenment (about 1450-1860), and he’s had his scholarly work published by such established and musty (in the nicest sense) institutions as Oxford and Cambridge. Still, he hasn’t hesitated to jump into modern culture’s roiling and breakneck digital stream.

The internet, he says, has been “hugely transformative” in the way we humans communicate and learn. “With the invention of the printing press,” he says, “Gutenberg changed the world, no question about it.

Johannes Gutenberg printed chapbooks. So does Huenemann. His primers, however, are electronic novella-length essays that explore such concepts as doubt, justice, the rational life — and they’re all instantly downloadable from Amazon. These modern-day chapbooks can be attained for a couple of dollars — or free if you’re a member of Amazon’s KindleUnlimited.

At 50 or 60 digital pages, the ebooks can be read in about an hour — the length of a plane ride or a couch break on a Sunday afternoon. They instruct, as well as entertain. “My essays are meant to be something that might entertain readers and get their thoughts going in different ways,” he says.

Huenemann’s first volley in ebooks was inspired by Minecraft, an international computer gaming phenomenon and obsession of his then 9-year-old son. Huenemann, too, was drawn in. Minecraft players create their own virtual worlds, happily building palaces with resources they hunt down or engaging in combat against zombies and huge spiders. At one point, struggling to escape a mineshaft and evading skeletons carrying bows and arrows, he realized, “There’s some interesting philosophical ideas at play.”

Scholarly publishing houses weren’t interested, unsurprisingly, in a book looking at the philosophy in Minecraft. But Amazon was. “They were very enthused,” remembers Huenemann. “They said, ‘This is exactly the kind of stuff we’re looking for — something that’s not a book, but is creative and engaging with contemporary life. And it’s also connected to great big ideas.”

He followed up How You Play the Game: A Philosopher Plays Minecraft, with what he calls the Stacks of Books series. The four books now in the series began life with Huenemann’s self-taught technique of learning through writing.

“I find that the way for me to understand something is to write about it,” he said. The resulting essays became the ebooks Inventing Justice, released in October 2016, followed in short order by World as Idea, Doubts and To View from Eternity.  Just released in May was Sloterdijk’s Spheres, exploring humans’ eternal obsession with, well, spheres.

There is really no theme, said Huenemann, except for a casual thread of “the interplay between knowledge and doubt.”

“I thought, ‘Let’s see if people are interested’,” he said. “And they have been. That’s been gratifying.”

At 99 cents or so a pop (minus Amazon fees), Huenemann isn’t getting rich. “I already have a salary,” he says. “My main interest is in making these ideas and essays available.”

He’s found that the audience for these digitally shared ideas is twofold.

First, there is the casual but educated reader who has only a Wikipedia-deep understanding of such thinkers as Spinoza, Hegel and Nietzsche. These are people who “want to engage more with the questions and further ideas of famous thinkers,” he said.

Then, there is the army of Huenemann’s former philosophy students. “I have a lot of students who after they graduate write back and say, ‘I miss college. I’d really like to get back into discussing ideas.’”

“Part of the reason I started writing the Stacks of Books essays is for those students who would like to basically sit in on another philosophy class,” he said.

“Now that I’m not in academia anymore, my brain starts starving to death,” says this former student, who earned his philosophy undergraduate degree in 2006. “I can’t always commit to reading a big book on Nietzsche, but these little bite-sized  books are fantastic.”

Huenemann plans to spend the summer months writing. The ebooks, he says, are “great and fun and important,” But, he adds, “I have to also keep my scholarly life going as well.”

He’s still likely to find some time to fit in another Amazon Single, perhaps on the relationship between science and magic — yes, the kind of magic that takes in astrology, potions and wizards. “Harry Potter-like magic,” he says.

“In the history of science in the 16th and 17th century, the dividing line between what we would call magic and what we know as science was very blurry,” said Huenemann.

“Kepler was doing his astronomy, but he was making astrological star charts at the same time.”

This article originally appeared in the summer 2017 Liberalis magazine. See more at http://chass.usu.edu/liberalis.

Charlie Huenemann blogs at https://huenemanniac.com/ and also posts at https://usuphilosophy.com/