It’s not every day that researchers conduct experiments while floating in mid-air, but Utah State University engineering student Jenica Sparrow did just that last June while participating in NASA’s Microgravity University.

“Zero gravity was so weird,” she says. “It was almost like swimming in a pool, but even more drastic. The first time, I almost felt like I was blacking out.”

Sparrow performed her own study as part of the group’s experiment, to which she attached an accelerometer to measure the influence of small background accelerations and acceleration changes on the velocity, overall acceleration and departure rate of bubbles in nucleate boiling. She’s among 33 USU students and a similar number of undergraduates from the University of Utah presenting findings at the 2012 Undergraduate Research Day on Utah’s Capitol Hill Jan. 24, in Salt Lake City.

“The purpose of our experiment and my part of the project is to better understand the process of heat transfer in microgravity,” says Sparrow, who graduated from Utah’s Layton High School in 2010.

Such knowledge will be crucial, she says, as scientists and engineers plan thermal management of spacecraft designed to support humans on long-duration space missions to Mars and beyond.

“As an undergraduate, I have been very fortunate to have the opportunity of doing research starting from day one in my freshman year,” says Sparrow, who is the recipient of multiple academic scholarships, including a USU Dean’s Academic Scholarship and the Corbett Women Engineering Scholarship.

A civil engineering major, she looks forward to traveling to Tanzania this summer to lead a toilet and sanitation project called “Soilets” with HELP International.

“I’ll be working in several communities carrying out a variety of health, education and business projects,” she says. “I’m looking forward to getting involved with USU’s Engineers Without Borders chapter and working in world development and sustainability. Ultimately, I’d like to work for a civil engineering firm in structural design and architecture or water systems and soil.”

Whether floating in weightlessness 30,000 feet above the ground or tackling problems underground, Sparrow says she looks forward to a career that allows her to help others.

“Boiling water in space and designing latrines are very different but each project has helped me better understand the engineering design process,” she says. “I love solving problems and finding solutions that improve people’s lives.” 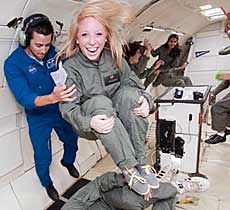 USU student Jenica Sparrow floats in microgravity aboard NASA's 'Vomit Comet’ microgravity jet in June 2011. The undergrad researcher studied the effects of acceleration on the USU Get Away Special Team’s nucleate boiling experiment. 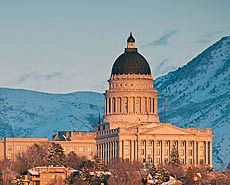