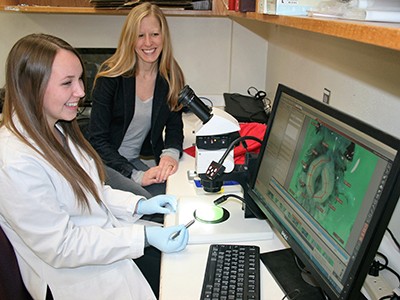 USU undergrad Makenna Johnson, left, with faculty mentor Karen Kapheim, uses microscopy to examine an alkali bee's reproductive organs. The two published findings on the evolution of division of labor in bees in 'Proceedings of the Royal Society B.’

Social bees are celebrated for their cooperative industry, but how did their innovative division of labor evolve? A starting point for examining this question may be study of their solitary cousins, say Utah State University biologists.

Karen Kapheim and Makenna Johnson tested a variation of the reproductive ground plan hypothesis, a long-examined theory in studies of evolution of social bees, in solitary, ground-nesting bees of south central Washington state. They published findings in the Jan. 18, 2017, issue of Proceedings of the Royal Society B. The researchers’ work was funded by the Utah Agricultural Experiment Station, the USDA-ARS Alfalfa Pollinator Research Initiative and USU.

“This variation of the reproductive ground plan hypothesis suggests division of labor – the ways social bees cooperate to complete all tasks necessary to keep the colony running – evolved from ancestral gene networks that function to align a female’s dietary preferences with the nutrients she needs during different phases of her reproductive cycle,” says Kapheim, assistant professor in USU’s Department of Biology and the USU Ecology Center. “A major limitation in evaluating this hypothesis is that we know almost nothing about the nutritional needs and preferences of solitary bees, which are most similar to social bees’ closest ancestor. Yet, solitary bees have no division of labor.”

“Some of these beds have been maintained by farmers for five to six generations,” Kapheim says. “The Touchet Valley bees are among the last remaining populations of the pollinators, which have succumbed to pesticides in many other areas.”

So prized are the bees that the State of Washington posts speed limit signs of 20 miles per hour near bee beds to protect the precious pollinators.

“You feel bad when you’re driving through these areas and you hear what might be a ‘bee hit,’” says Johnson, a 2016 recipient of a USU College of Science Undergraduate Research Mini-Grant.

The researchers captured bees using traps over nesting holes in the beds for lab study. In the lab, they harnessed individual bees and offered varied sucrose treatments to test each insect’s proboscis extension response. They noted the size of a female bee’s Dufour’s gland, located in the abdomen and playing a number of roles in bee reproduction, was a significant predictor of sucrose response.

Their results suggest, as predicted by the hypothesis, female solitary bees adjust their dietary preferences, when they become reproductively active.

“The Dufour’s gland as a predictor of sucrose response in alkali bees was something of a surprise, since this gland, also found in reproductive social bee females, but absent in social drones, is not the reproductive organ typically studied in social bees,” Johnson says. “Rather, the ovaries are usually the focus in reproductive studies of honey bees, the research model for social bees.”

She and Kapheim think there could be a link between Dufour’s gland development, sucrose response and development of division of labor in other species of social bees.

“Additional research is needed to understand the mechanisms by which division of labor, Dufour’s gland development and sucrose response in social bees is related to alkali bees,” she says. 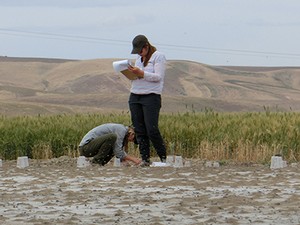 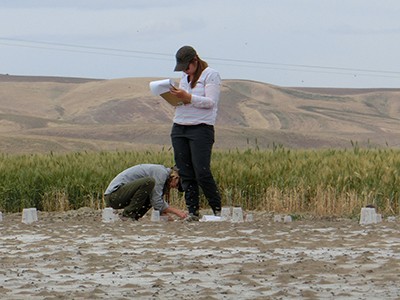