A Passion Play is defined as a mystery play, especially that performed by the residents of Oberammergau, Germany, approximately once a decade since 1634, representing the events of Christ’s Passion. It is also defined as an occasion or instance of drama or excitement.
Drama and excitement were woven throughout Mark Damen’s Inaugural Professor Lecture, “Vergil: Literature, Learning and Tragedy,” presented April 6 at the President’s Home. The lecture — a summary of Damen’s career and philosophy — used theatrical examples from much earlier in history —the time of the ancient Romans and Greeks.
“Mark Damen is a classic example of someone whose research informs his teaching, and whose teaching informs his research,” said History Department Head Norm Jones during his introduction. “A student of classical theatre, specializing in the great plays of 5th century B.C. Athens, he believes that you cannot understand a playwright or the history of a play unless you understand the realities of theatrical production. Consequently, he writes plays and acts frequently. His understanding of theatre means that his teaching is theatrical in the best sense of the word. He holds his students like a good play holds its audience. They attend just for the pleasure of it!”
Damen’s lecture was part of the 2005-06 Inaugural Professor Lecture Series at Utah State University, a program that highlights the accomplishments of faculty members who have been promoted to full professor in the past year. President Stan Albrecht and First Lady Joyce Albrecht hosted the event that included invited guests and a number of faculty and administrators, including Jones and College of Humanities Arts and Social Sciences Dean Gary Kiger.
“Working from the proposition that my talk today should illuminate my academic career to date, I’ll attempt to show what I do, which is not easy because my professional career involves three major areas of interest: teaching, the study of ancient language and society, and the history of the theatre, especially its origin and early evolution,” Damen told those attending the lecture.
The field of Classics, to which Damen has devoted his professional life, is among the oldest academic fields in Western civilization. Using the Roman poet Vergil as the connecting thread, Damen’s lecture guided listeners through an exciting narrative that combined his professional skills as a scholar, teacher and actor. He entertained, taught and inspired those who attended.
“Virgil is one of the greatest thinkers who’s ever lived and his work remains relevant because at its core, it transcends time,” Damen said. “That is, Vergil’s poetry continually reinvents itself as it passes through different hands whose grip squeezes out new truths with every century that passes.”
To the Romans, Vergil was a master of Latin poetry, Damen said. To the Middle Ages he became the teacher par excellence. A passage from Vergil’s Aeneid became the foundation of Damen’s Inaugural Lecture — one he translated from the original Latin. The core of his presentation, the passage became a lesson from history and drama.
“Like few other things in my professional work, this passage touches upon all three major interests of mine: teaching, classical literature and ancient theatre and drama,” Damen told the gathering following its reading.
“I’ll end by saying that Classics as a discipline, like Vergil’s work, has and must constantly re-invent itself by adapting to each passing age,” Damen concluded. “Now we’re scientists and historians, no longer astrologers and word-magicians. … The point is that the rich wealth of Roman literature, especially its deep awareness of human nature, like a hundred-eyed watcher sent by the gods to keep us from wandering too far astray, reminds us of the tragedies ever looming over our heads: the horses, the plays, the loves that kill. You asked what I do. That’s what I do. I teach children about theatre and Romans and all that comes of understanding and appreciating the past.”
Professor Damen has a shared appointment in the departments of History and Theatre Arts. He teaches a wide range of courses, including the ancient Near East, pre-modern civilization, theatre history, playwriting and all levels of Latin and Greek language. He has three times been named a USU Mortar Board Outstanding Professor, and in 1997-98 he was named the Teacher of the Year for the College of Humanities, Arts and Social Sciences. He went on to win the Carnegie Foundation’s CASE Teacher of the Year Award for the state of Utah.
Damen earned his bachelor’s degree summa cum laude from the University of Florida, where he was named outstanding graduate, first in his class, and was elected to Phi Beta Kappa. He completed his master’s and doctorate degrees at the University of Texas at Austin. He has written numerous articles and book reviews for journals that include “The Transaction of the American Philological Association,” “Classical Journal,” “Classical World” and “Theatre Journal.” He has frequently served as an actor or director in stage productions sponsored by Utah State Theatre.
Damen’s wife, Frances Titchener, is a colleague in the small but robust Classics program in the History Department.
The Inaugural Professor Lecture series will continue next year. 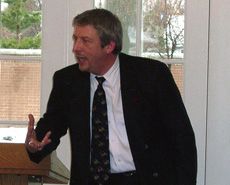 A lecture with passion. Mark Damen quoted from a self-translated passage by Vergil during his lecture. 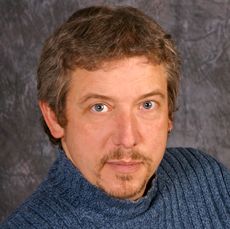