Like many junior faculty members, Damon Cann is engaged in the promotion and tenure process. An assistant professor in the Political Science Department at Utah State University since 2008, Cann recently received a national book award that will that will find a welcome place in his tenure review package.
Cann received the Richard F. Fenno, Jr. Prize for the best book in legislative studies published in 2008, for his book Sharing the Wealth: Member Contributions and the Exchange Theory of Party Influence in the U.S. House of Representatives (SUNY Press, 2008).
The award’s namesake, Richard F. Fenno, is an American political scientist known for his pioneering work on the U.S. Congress and its members.
“In the tradition of professor Fenno’s work, this prize is designed to honor work that is both theoretically and empirically strong,” the Fenno Prize Web site states. “Moreover, this prize is dedicated to encouraging scholars to pursue new and different avenues of research in order to find answers to previously unexplored questions about the nature of politics.”
Cann was presented the award and a travelling plaque at the American Political Science Association meeting in Toronto. The award comes from the Legislative Studies Section of the American Political Science Association.
“When I first received the telephone call to congratulate me, I was floored,” Cann said. “I wondered why a professor from Harvard was calling me.”
The head of the Fenno Prize screening committee, Kenneth A. Shepsle, the George Markham Professor of Government in the Institute for Quantitative Social Science at Harvard University, made that phone call. Shepsle, with committee members Sarah Binder and Simon Hix, ranked Cann’s book as the year’s best.
“I was humbled and honored,” Cann said. “After all, only a handful of untenured professors get this award. It usually goes to senior, distinguished scholars in the discipline. It is a privilege to have my work recognized and join the list.”
Cann’s book grew from his doctoral dissertation at the State University of New York at Stony Brook. He continued and expanded his research to publish the book when he was a faculty member at the University of Georgia, prior to joining USU’s faculty. The book looks at a practice that began about 30 years ago when members of congress began making campaign contributions to each other — what we know today as “member to member” contributions. As the practice developed, key members of congress raised large sums of money then contributed funds to fellow party members or the party at large. This practice and behavior “took off” in the 1990s, Cann said.
Through his research, Cann aims to answer the question, “what are the consequences and why should we care about these contributions?”
“The story of members’ contributions to one another’s election campaigns is fascinating, and clearly under-researched,” the Fenno Prize selection committee wrote. “Damon M. Cann’s Sharing the Wealth: Member Contributions and the Exchange Theory of Party Influence in the U.S. House of Representatives tells this story very well. It engages with the existing theoretical literature, introduces a lot of new data, applies some sophisticated methods well and draws careful inferences.”
The selection committee called the book a theoretically informed and empirically succinct contribution to the understanding of the mechanics of party power in the House of Representatives.
“It moves beyond our general understanding of the rise of Member-to-Member contributions, and is able to show effectively the consequences of the votes-for-dollars and dollars-for-power exchanges that appear to underlie contemporary majority party politics. Cann complements existing party theory, proving a neat perspective on the selective incentives that lie at the heart of leader-member exchanges in the House. It stands out as a very nicely executed project.”
Jamie Carson, a former colleague at the University of Georgia, said Cann’s award is no surprise.
“He is an exceptional junior scholar who is both innovative and meticulous in his research,” Carson said. “His book, based on his dissertation, is what we should strive for in terms of exemplary legislative politics scholarship.”
The work also looks at a topic that has received little attention in congressional research.
“It opens up a number of avenues for future research by showcasing the role that legislators can play in facilitating their colleagues’ reelection. In short, it is an excellent book that is well deserving of the Fenno Prize.
At USU, Cann teaches courses in elections and campaigns. He specializes in American politics and methodology. In addition to his first book, he has published articles in a variety of scholarly journals. His research interests include elections, Congress and methodology.
As part of his award, Cann now holds a travelling plaque with his name and university added to the list.
“This award has been at Berkeley, traveled to Columbia and Stanford and for the next year, it will be at Utah State University,” Cann said.
Next year, the plaque will move on, and Cann’s name and university will become a permanent part of the impressive list.
“That’s a great reflection on Utah State University,” he said.
Related links:
American Political Science Association
The Fenno Prize
USU Political Science Department 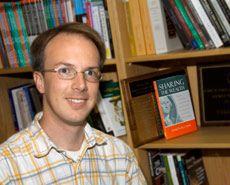 USU political science professor Damon Cann was honored with the Fenno Prize for the best book in legislative studies.