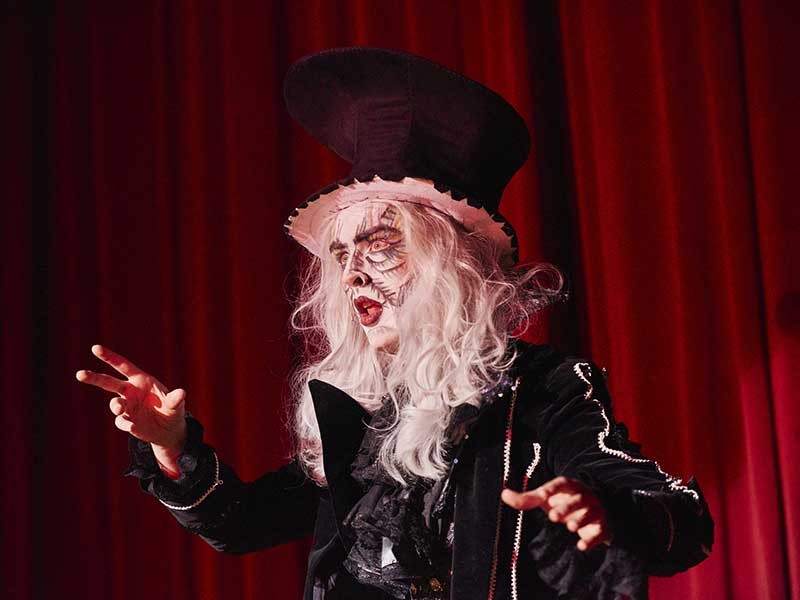 Shockheaded Peter, created for the stage by Julian Crouch and Phelim McDermott, plays March 1, 4-7 at 7:30 p.m. and March 2 at 2 and 7:30 p.m. at the historic Caine Lyric Theatre in downtown Logan. The musical was originally conceived and produced by Michael Morris for Cultural Industry, London, with original music and lyrics by The Tiger Lillies.

Shockheaded Peter is a “nasty picture book” of a musical, loosely based on German children’s book Struwelpeter, written by Heinrich Hoffman. The macabre and sinister production uses musical versions of the book’s poems to spin stories of naughty children and misguided parents. The show is set in a distorted Victorian toy theater and evokes a lost world of theatrical illusions including a music box spinning out of control and an advent calendar with a horrifying surprise behind every door.

Richie Call, assistant professor in the Department of Theatre Arts in the Caine College of the Arts and director of the show, said that German pediatrician Heinrich Hoffman was looking for an interesting book to buy for his son and couldn’t find anything so he wrote and illustrated Shockheaded Peter himself. Call said the book has some dark aspects to it to illustrate morals and lessons to children.

As a father, Call wonders about things we tell our kids to scare them into behaving and if it’s okay to lie to them if the outcome is for their benefit. He says he’s not sure about the answer but he thinks the question is what’s really important.

The style of Shockheaded Peter is meant to be very theatrical. Call explained that having a narrator for the show is meant to break what is referred to as “the fourth wall,” a performance convention in which an invisible, imagined wall separates actors from the audience.

“There’s actors playing characters playing characters, with an element of puppets,” Call said. “It’s an automatic reminder to the audience that they’re watching a play, but sometimes it pulls you into the moment even more and you can just soak in the story.”

Call hopes Shockheaded Peter is different than anything audiences have ever seen, in a good way.

Tickets for Shockheaded Peter are $18 adults, $15 seniors/youth, $10 USU faculty/staff and free for USU students with ID. The show contains images that may be disturbing to some audience members. Viewer discretion is advised. No puppets were harmed during the creation of this production. For more information or tickets, contact the CCA Box Office in room L101 of the Chase Fine Arts Center on USU’s campus, call 435-797-8022, or go online to cca.usu.edu.