Utah State University President Stan Albrecht honored three university professors as part of the Inaugural Lecture Series, a program coordinated by the provost’s office, in fall 2013. Scot Allgood, Heng Ban and Dennis Hassan all presented for the series that highlights the accomplishments of faculty who have been promoted to full professor.

Allgood’s main research interests are in the area of marital issues, marriage and family therapy process and assessment of dysfunction.

Ban is a professor of mechanical and aerospace engineering who presented at President Albrecht’s home in October 2013 as part of the lecture series. He lecture “Thermal Energy and Thermal Behaviors of Materials,” reflected Ban’s research interests that include thermophysical properties of materials, fluid dynamics at micro- and nano-scale, and energy and environmental aspects of coal and biomass utilization.

Known throughout the College of Engineering for his research, Ban is also known for his teaching and advising strengths and has received many awards during his time at USU reflecting these strengths.

Some of Hassan’s favorite set designs include Aida and Thoroughly Modern Millie for the Hale Center Theatre and Macbeth and costumes for Tartuffe at Utah State Theatre. His most recent work includes Utah State Theatre's Alicia in Wonder Tierra and The Cherry Orchard. 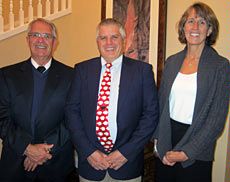 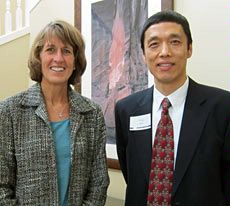 Heng Ban, of mechanical and aerospace engineering, with Executive Vice President and Provost Noelle Cockett. Ban has been promoted to full professor. 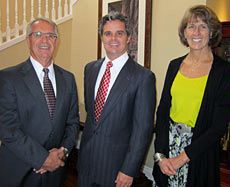 Dennis Hassan, of theater arts, has been promoted to full professor. He is joined by USU President Stan L. Albrecht (left) and Executive Vice President and Provost Noelle Cockett (right) at his Inaugural Professor lecture.