Utah State University alum Steven Cannon’90 is somewhat surprised he’s been singled out for the nation’s highest honor for science and engineering professionals in the early stages of their research careers.

“I’m 48 years old so, among my fellow award recipients, I’m a bit old,” says Cannon, a plant geneticist with the USDA-Agricultural Research Service Corn Insects and Crop Genetics Research Unit at Iowa State University in Ames. “But since I’m on my third career, I am in the early stage of my current professional endeavor. And I’m truly humbled by this honor.”

Cannon is one of 102 recipients of the most recent round of Presidential Early Career Awards for Scientists and Engineers announced by President Barack Obama Dec. 23, 2013. The Logan, Utah, native travels to Washington, D.C., later this year, at a time to be announced, for a formal awards ceremony.

“The impressive achievements of these early-stage scientists and engineers are promising indicators of even greater successes ahead,” President Obama said in announcing the awards. “We are grateful for their commitment to generating the scientific and technical advancements that will ensure America’s global leadership for many years to come.”

Since joining ARS in 2006, Cannon has been instrumental in multi-institution efforts to sequence the genomes of soybeans, peanuts, chickpeas and similar legumes that form the staple diet of millions of people throughout the world, as well as providing critical fuel and animal feed.

“Our work has been very similar to the Human Genome Project,” says Cannon, who earned bachelor’s degrees in biology and math education from USU. “Sequencing the genomes of various legumes allows us to pinpoint the precise location of genes responsible for specific traits.”

This information, available online through SoyBase and the Legume Information System, allows faster progress in breeding crops more resilient to climate change and more resistant to pathogens. Breeder access to this information ensures greater food and energy security across the planet.

“From those early experiences, I learned the pleasure of working outside with plants,” says Cannon, who graduated from Logan High School in 1984. “There was always something new.”

The young lad discovered a whole other world under the microscope as a student at the USU-based Edith Bowen Laboratory School.

“I vividly remember visits to USU’s Intermountain Herbarium, where faculty member Leila Schultz allowed me to use a microscope to examine sagebrush leaves,” Cannon says. “I discovered tiny hairs cover the leaves; hairs that reflect the hot midday sun and also protect the plant from freezing in the winter. It was beautiful.”

The youngster’s insatiable curiosity was further stoked by his parents, Lawrence “Larry” and Helen Cannon, both USU faculty members. Larry is a professor in USU’s Department of Mathematics and Statistics; Helen served as a lecturer in the university’s Department of English for 13 years.

“My parents instilled in me a love of learning — not just of the sciences — but of many things, including reading, politics and the arts,” Cannon says.

Following graduation from USU, Cannon earned graduate degrees in American culture studies and urban planning, before serving as city planner for the community of Stillwater, Minn., near St. Paul. He subsequently worked as a software designer for a children’s educational software company for five years. In 1999, Cannon chose to pursue doctoral studies in plant biology at the University of Minnesota, where he completed his degree in 2003.

Each of those experiences contributed to his most recent career, he says.

“My current work is really a hybrid between biology and computer science.”

Reflecting on his years at USU, Cannon fondly recalls sociology and anthropology studies with professors Richley Crapo and John Morris, as well as science studies with Bruce Bugbee, Ivan Palmblad and Jim MacMahon.

“I took advantage of the very interesting fields well represented at USU,” he says and he urges current undergrads to do the same.

“Don’t be afraid to step outside your major and explore different disciplines,” Cannon says. “After all, the world is interdisciplinary.” 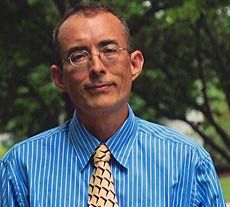 USU alum and USDA plant geneticist Steven Cannon'90 is a recipient of a Presidential Early Career Award for Scientists and Engineers, the nation’s highest honor for science and engineering professionals in the early stages of their research careers. 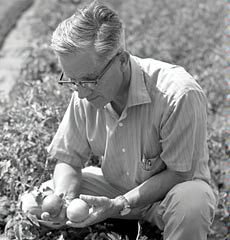 Cannon's late grandfather, Orson Cannon, pictured in this undated photo, was a USU professor, head of the university’s Department of Botany and, like his grandson, a USDA scientist. Cannon’s parents are USU faculty members Larry and Helen Cannon.