Cathy Hartman, College of Business, was honored as a full professor on April 11 at a reception at President Albrecht’s home as part of the Inaugural Professor Lecture Series at Utah State University.
“As I looked back over my journey, what struck me most is that I never plotted this particular career course in academia and never dreamed that once I arrived my research would attract the level of outside funding that it has,” Hartman said.
Hartman has made many contributions to the research program at Utah State. Her research partnership with Edwin Stafford has led to a $1 million grant from the Department of Energy to study the development of commercial wind energy in Utah.
“I can see how important and rewarding it is to persevere in developing expertise in research areas in which I have a high personal interest,” Hartman said.
Professor Hartman works to develop personal relationships with the students she instructs and maintains association with many of those students beyond their gradation.
“I have found my students to be serious, hard-working, dedicated young men and women,” Hartman said. “I continue to interact and do business with some of them who now run their own businesses. It’s rewarding to see them putting into practice the marketing principles I have taught them.”
“I have lived and worked in some picturesque places, but none compare to the beauty of Logan and its people,” Hartman said.
Hartman said it took hard work and determination to get where she is today. “I was turned down for a graduate assistantship at a university in Kansas,” Hartman said. “The position was given to someone else, because I was a woman.”
An administrator at the business school explained to Hartman that he had chosen a young man over her because he would do more with it than a woman might. She said women are still trying to overcome barriers created by strongly held misperceptions.
Hartman received her bachelor of arts degree from Pittsburg State University, then went on to earn a master’s degree from Wichita State University in Environmental Economics. She later received her doctorate in business administration from the University of Colorado-Boulder. 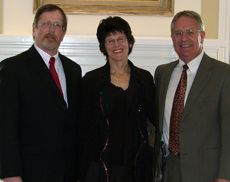 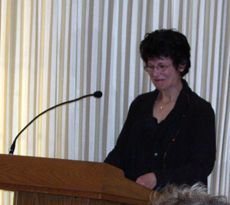 Professor Hartman discussed her research during her lecture at the President's home.