To celebrate their success in being promoted to full professor this year, two members of the Utah State University faculty presented their inaugural lectures to friends, family, students and colleagues.

Arthur Caplan, a professor of applied economics, gave his lecture titled “A Compendium of Research in Environmental Economics.” The presentation, given Jan. 18, summed up his research and experiences throughout his career.

Caplan received his bachelor’s degree in economics and communications from the University of Michigan in 1983. He spent the year after graduation living in northern Israel. In 1986 he received his master’s degree in agricultural economics from Washington State University. He then joined the U.S. Peace Corps and spent four years as an extension economist in the southern African nation of Botswana. There, he met his wife, Frances, and the two moved to Oregon in 1991. After completing his doctoral studies at the University of Oregon, Caplan landed his first-choice job at Weber State. After five years there, he moved his family to Logan where they have been for the last 10 years.

An expert in a different subject, Douglas Jackson-Smith presented his inaugural lecture Jan. 25,  “From Rural Sociologist to Socioecohydroengineering: An Intellectual Roadmap.”

Jackson-Smith has been at Utah State since 2001, when he first took a position in the sociology program with a focus on research methods and environmental and natural resource sociology. He has also served as director of graduate studies in sociology since 2002, and represents his college on the Faculty Senate Executive Committee and Budget and Faculty Welfare committee. He attended Deep Springs College in California before completing his bachelor’s degree in rural sociology at Cornell University in 1986. During and immediately after his undergraduate studies he lived and worked on rural development projects in Indonesia and Nepal. He began his graduate studies at the University of Wisconsin in 1988, and received a master’s in rural sociology in 1990, a master’s of art in agricultural economics in 1991, and his doctorate in sociology in 1995.

The Inaugural Lecture series is held to honor members of the USU faculty who have completed the promotion and tenure process and have been promoted to full professor in the last year.

USU President Stan L. Albrecht and his wife, Joyce, host the professor at their home with a reception in their honor before the lecture presentations. 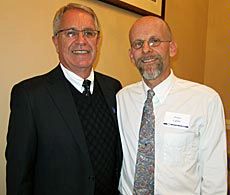 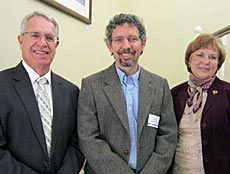