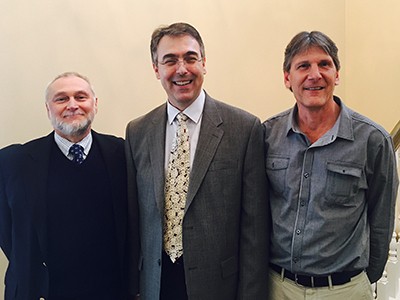 Newly promoted to full professor, Catalin “Cat” Buhusi recently addressed his friends, family, and colleagues in the Utah State University Department of Psychology in the tradition of the Inaugural Address.

Buhusi grew up in Romania; a beautiful country which he likens to Tolkein’s mythical Shire. His ancestors were artisans, masons and teachers. Buhusi received a computer engineering degree from Technical University of Iasi.

After graduating first in his class, Buhusi was recruited by the Romanian Academy of Sciences, where he was a research assistant for 3 years, pursuing research projects in artificial neural networks, fuzzy systems and evolutionary computing.  His initial papers were theoretical, but 20 years later he found out that those ideas are put into practice in patents for, in one example, optimizing the inner workings of car engines. He briefly visited the UK to study parallel computing, and then started a doctorate in computer science in his home country, when a change of heart made him cross the Atlantic and start a new life in the United States as a neuroscientist.

Buhusi got his doctorate in experimental psychology at Duke University, where he advanced as a postdoctoral fellow and assistant professor, switching from “fuzzy systems” to “fuzzy rats.” He studied the way animals change their behavior based on timing, or the perception of time. At Duke, Buhusi got his first small grant, which allowed him to ask deeper (and more expensive) questions about how one’s brain perceives the passage of time. For Buhusi, scientifically and literally, “time is money,” as he makes a living studying why people treat time and money in the same way, using the same words and operations. There is much more to be done in human studies, but Buhusi’s work in understanding how timing perception works in the brain has potential for applications in treatments for Parkinson’s disease, depression, Huntington’s disease, autism and schizophrenia.

While enjoying some shrimp in the beautiful city of Charleston South Carolina, he was asked by fellow scientists at the Medical University of South Carolina to spend some time there. The research was productive, the shrimp was good, and six years passed in the blink of an eye, since “time flies when one’s having fun.” A wonderful timing coincidence led to his meeting Tim Shahan, who convinced him to visit USU on a nice January day. Buhusi visited and fell in love with Logan, the university and the mountains.

Buhusi has been married for more than 25 years to his high school sweetheart, Mona Buhusi, a geneticist turned neuroscientist. They have been able to collaborate on several projects at USU. They don’t have children; however, they have many friends, three cats and plenty of students whom they care for and call their kids. Many of Buhusi’s “kids” are now medical doctors, postdocs and faculty around the world.