It’s not every day that middle school students grow radishes from seeds that have flown in space.

And it’s an especially rare opportunity for the students who have been doing it through the USU STARS! GEAR UP program, housed in the Emma Eccles Jones College of Education at Utah State University. The program aims to inspire teens to prepare themselves for higher education.

All of the partnering schools involved in the USU STARS! GEAR UP program have at least 50 percent of their students enrolled in free and reduced lunch.

“This project has opened up opportunities that have not really been there before,” said Mike Barlow, an eighth grade science teacher at Gunnison Valley Middle School. “We’re a small rural school.”

The partnership between USU STARS! GEAR UP, the Space Dynamics Laboratory at USU and schools from three countries makes it possible for middle school students to plant seeds, chart growth under very controlled conditions, collect data and share it with other student researchers from faraway places.

Their mission: discover if there is a difference in how radish seeds grow after they have been exposed to space radiation. They are comparing the growth of seeds that were flown on the Russian BION M1 mission to seeds that never left Earth’s atmosphere.

The radishes are grown in a special chamber designed for the student experiments, complete with the same artificial light and soil profile. Students build their own chamber (in the shape of a rocket).

These experiments continue a tradition that began in 1992, when USU researchers worked with partners in Russia to experiment with growing crops in microgravity aboard the MIR space station. The research has evolved (it now happens aboard the International Space Station), but the goal to better understand how to successfully grow plants in space has continued.

Now, students from seven schools in the USU STARS! GEAR UP program will continue performing their own research, collecting data and collaborating with other student researchers.

In future years they can change variables in the experiment, like the light spectrum used to grow the plants. The day may come that their work on the ground may influence ongoing experiments in space, said Eric Packenham, who leads the USU STARS! GEAR UP project.

Along with the hard science experience, the students will also practice the soft skills of working with fellow researchers from other cultures through Skype.

“We’re bringing in Hawaii, Japan and Russia,” said Gayle Bowen, education outreach administrator from the USU Space Dynamics Lab. “The GEAR UP students will have the opportunity to gain an appreciation of other cultures and communication styles. It will help them understand what it takes to be part of a global workforce.”

The project is also designed to give the students a chance to apply math and art skills as they build their own growth chamber.

Most of the students at Gunnison Middle School don’t have the chance to go to science camps and conferences that would expose them to this level of research, Barlow said.

So how do space radishes taste?

“Taste was not one of the parameters we were asked to look at,” Barlow said.

The radishes were discarded at the end of the pilot experiment.

The Bion project will continue through the end of March.

Partners include the USU Space Dynamics Lab, the Emma Eccles Jones College of Education and Human Services, USU STARS! GEAR UP, the USU Center for Civic Engagement and Service Learning and the Hawaii Space Grant Consortium. 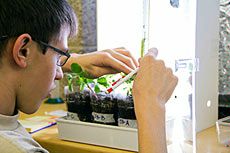 A student measures the growth of radish plants in a controlled experiment at Utah State University.