Mark Brunson is interested in change. He ponders how management of public and private lands can change for the better. He wonders how to help residents of the American West understand and cope with changes brought about by both manmade and natural phenomena. Carefully avoiding use of the "E-word" (environmentalism), he thinks about how public land managers, landowners, ranchers, recreational enthusiasts, farmers, hunters and others can become collaborators rather than adversaries.
Brunson spoke about his professional musings and endeavors to family, friends and colleagues who joined him Oct. 20 at the President's Home for the second talk in the university's 2005-06 Inaugural Professor Lecture Series. The series highlights the accomplishments of university faculty and is open to those who have been promoted to full professor in the past year.
An educator of many hats - professor in the Department of Environment and Society, director of undergraduate education for the College of Natural Resources and adjunct professor for the Department of Forest, Range and Wildlife Sciences – Brunson says he's an aspiring rangelands social scientist.
Unlike many of his colleagues, Brunson spends more time observing two-legged mammals than those that walk on all fours. Using research methods that are more familiar to sociologists and psychologists than wildlife scientists, he examines "wicked problems" – challenges for which no single optimal arrangement exists; problems that can't be solved by a computer algorithm.
Brunson cites the challenges emerging from Hurricane Katrina as an example. "New Orleans is more than a civil engineering problem," he says.
Or what about prescribed burning to prevent wildfires? "You might be willing to put up with some smoke in your community to protect your neighborhood," he says. "Unless your four-year-old child has asthma."
While there may be no one-size-fits-all solutions to wicked problems, there are "less useful" and "more useful" ways to address them, says Brunson. The key is finding more of the latter.
Brunson, who joined Utah State in 1992, was named "Professor of the Year" in 1997, "Advisor of the Year" in 1995 and 2002, and "Undergraduate Research Mentor of the Year" in 2003 for the College of Natural Resources. He has published numerous book chapters and papers in refereed journals.
Brunson holds a bachelor's degree in history from the State University of New York at Binghamton and completed post-baccalaureate study in biology at the University of Texas at San Antonio. He earned a master's degree in recreation resource management and a doctorate in forestry from Oregon State University. 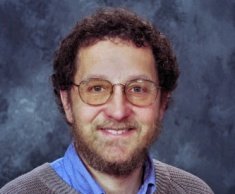 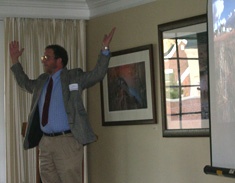 It was how big? Professor Mark Brunson presented his Inaugural Professor Lecture during an afternoon reception at the President's Home.