Ryan Toth works part-time on the field staff for Cru, a worldwide interdenominational Christian group whose goal is to help people connect with Jesus Christ. He said he has seen an increase of interest in USU’s chapter of the group this year.

“It was interesting looking at our sign-up list from Day on the Quad,” Toth said. “It was surprising to notice how many out-of-state students signed up. I’m pretty sure it’s more than any year I’ve been involved.”

Toth, who graduated from USU in 2012 with a religious studies degree, said he was involved with the group ever since he came to USU five years ago.

Wayne Dymock, director of the Church of Jesus Christ of Latter-day Saints Logan Institute of Religion, said they have seen more students from out-of-state as well.

“I have students at the institute from New York, Texas, California, and it’s been wonderful to rub shoulders with these kids from all over the United States,” Dymock said.

The Latter-day Saint Student Association still has more than 6,000 members this year despite its drop of about 500 in enrollment, Dymock said. Every USU student enrolled in the institute program is a member of the club, he said.

“We know we’re a dominant culture in the region, but we live in a world filled with diversity,” Dymock said. “We know numbers-wise we’re a big influence, but we don’t want to be overbearing. We try and build bridges of understanding.”

Part of the ways Dymock said the group builds bridges is by inviting other religious groups to visit the institute and converse. He said a few times a year, they have groups from religiously-affiliated schools like Creighton, Biola and Azusa who come and explain what they believe.

“One of the benefits of religious diversity is that all of us are working towards a common good by making the university better, by making people better,” said Bryan Winward, assistant director of the institute. “It doesn’t matter which religion you’re from.”

Isaac Stewart, a senior majoring in English and member of Cru, said he would like to see the university to host events where different religious groups could share what they believe and people could have the chance to explore other things in a public setting.

Toth said he feels there is somewhat of a separation between LDS culture and non-LDS culture in this area.

“One of the unfortunate things about it is that for some people, it turns into an ‘us-vs-them’ thing,” Toth said. “One thing we do is encourage people to build relationships with people who are different than them and have conversations to find out what the other person things or believes.”

Winward said he believes students would benefit from learning more about each other.

“Culture might isolate us, but religion brings us together,” Winward said. “I think there’s a certain strength that would come to the university if they found themselves more on common ground than divided, and even those who don’t have a religion — they all would benefit as we work together.”

Not all religious groups, however, are so fortunate as to have an official and active organization within the university where students can go for support. Mayran Mohamed, a junior and former president and founder of the Muslim Student Association, said the group he helped begin is currently inactive.

“It was intended to bring the Muslim students here on campus together and also give non-Muslims the opportunity to come learn more about the religion,” Mohamed said. “It was started up because many of the international students are Muslims and it was a place for them to feel at home.”

He said more than 18 different nations were represented in the club, and the group helped connect students with others like them on campus. It helped the students learn how to identify as an “‘American Muslim’ or a ‘Muslim living in America,’” according to Mohamed.

He said after events like 9/11, publicly practicing and claiming Islam has become a “quite a challenge.”

“Even though the MSA is still inactive, (the Muslim culture) is very much active among your Aggie community,” Mohamed said. “There are still Muslims who are a part of this Aggie family and, along with other religious organizations, they are trying to promote peace, love and unity.”

Stewart said he would like to see more religious diversity represented on campus.

“I detect almost zero religious diversity on campus, to be honest,” Stewart said. “The overwhelming sense is the LDS one because of the LDS temple and the institute so close by. I feel like recruiting people from out of state is a good start.”

Stewart said he has had a lot of exposure to different religions and finds it beneficial.

“It’s easy to get comfortable in your own religion and then misunderstand others in their religions,” Stewart said. “Examining other religions helps me strengthen my own beliefs as well as understand other people around me who believe different things.”

But Stewart said even within the religious group of Cru, he feels he has been challenged to think about different things in relation with God.

“It’s important because people do need to ask questions about God’s word,” Stewart said. “I use this as a core, guiding principle in my life, and I think it’s important for everybody.”

Bradon Capener, president of LDSSA and a senior in business administration, said there is also some diversity within his organization.

“Being the biggest club on campus, we’re in every field of the university,” Capener said. “The colleges are all represented.”

“These missionaries are learning more about cultures and countries,” Dymock said. “They’re becoming an advocate for their country (where they serve).”

Still, Toth believes the best way to bridge the gaps between religious beliefs is to have meaningful conversations.

“I love the show ‘Walking Dead,’ but if all I did was talk about the weather and ‘Walking Dead,’ I wouldn’t get anywhere,” Toth said. “Spiritual conversations are what I love. It shows so much more of who the person is and how they became that way. That’s one thing I don’t see going on amongst a lot of students that I think could be very beneficial.”

“I think something important for students to get from this article is just having that understanding that we have just as many similarities to bring us together,” Capener said. “Recognizing our similarities build bonds of brotherhood and friendship in spite of those differences.” 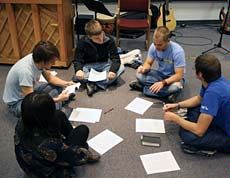 Members of Campus Crusade for Christ circle together at their regular meeting Tuesday night. The nondenominational Christian group is seeing growth along with other groups on campus. (Kylie Haslam photo from the USU Statesman Online)