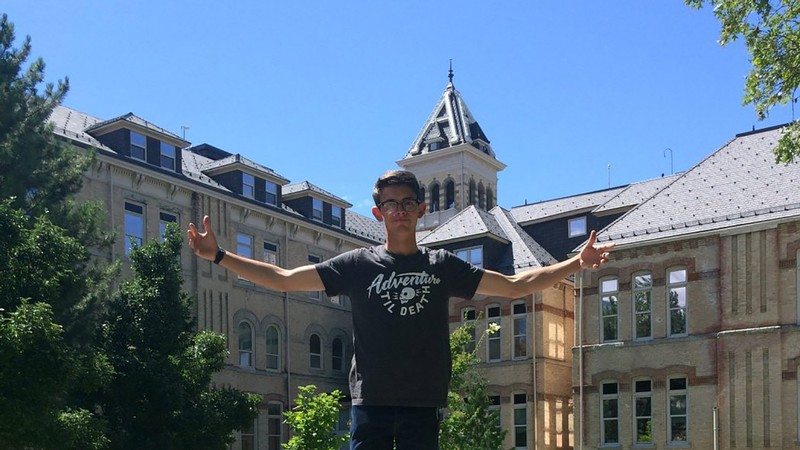 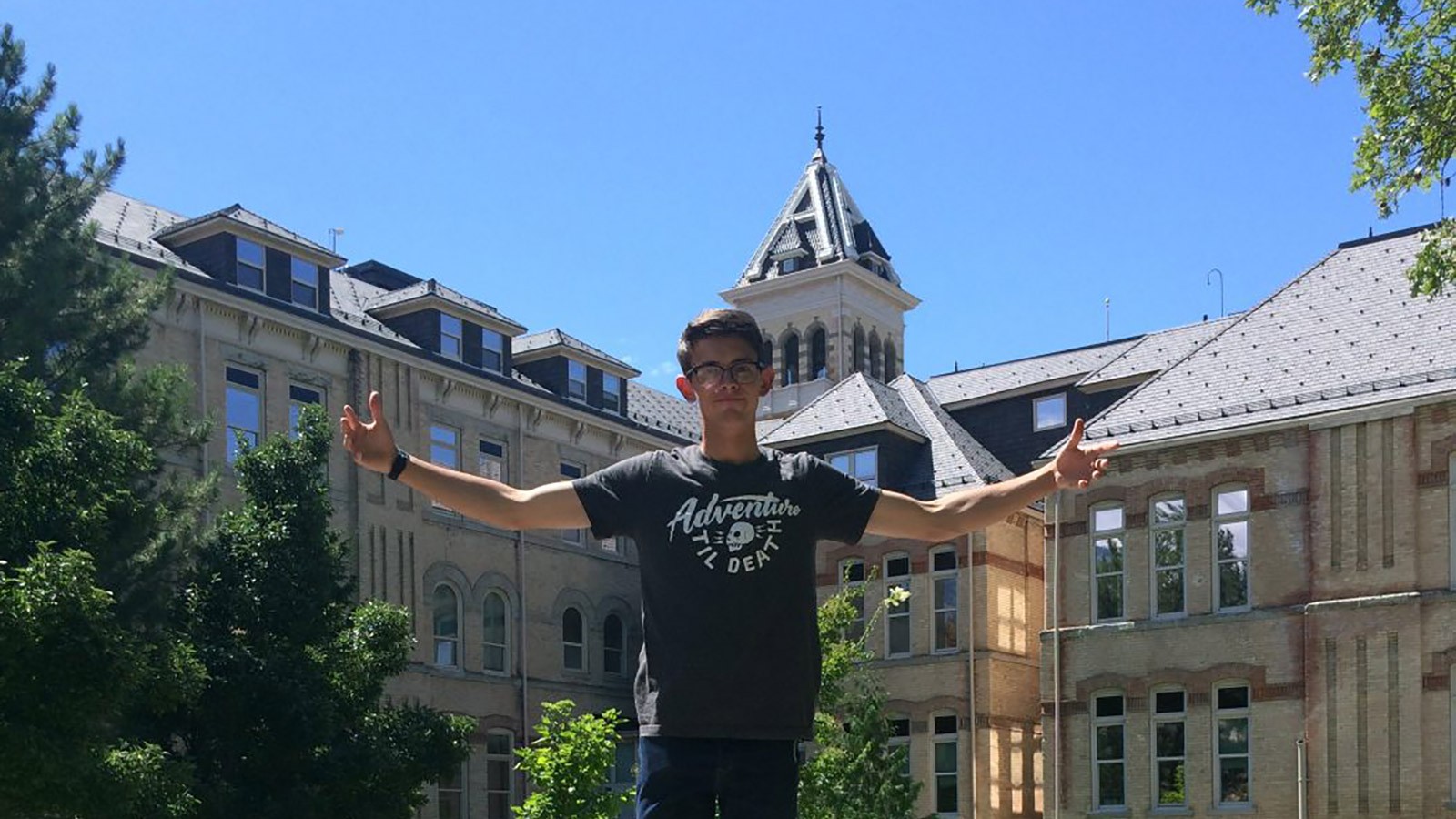 In his short four years at Utah State University, Dillan Passmore managed to be a part of six organizations, all of which he left his mark on. From residence life to an internship in Washington for Senator Mike Lee to working for student media, Passmore has done it all.

However, attending Utah State is something that almost did not happen.

Growing up in Rigby, Idaho, Passmore knew most of his friends would attend Brigham Young University-Idaho, but he never had an interest in following the trend.

“When I was a junior in high school, I had a couple of friends I tried to convince to go to Utah State with me,” said Passmore. “I was in band, and we went down there for a competition. We ended up touring the campus, and I really liked it. I said, ‘you guys, we can all go to USU, room together, and it’s even better — it’s not BYU-I.’ We all applied and I was the only one that actually came.”

Passmore has never regretted his decision. After serving a mission for the Church of Jesus Christ of Latter-day Saints in Baltimore, Maryland, he arrived at Utah State in the spring of 2017 eager to learn.  Inspired by his love of Spider-Man, the comic book hero who, when not tackling crime or studying, took photos for the fictional newspaper The Daily Bugle. He originally was majoring in journalism and even wrote for The Utah Statesman for a while.

Soon, Passmore began to have second thoughts. In one of his classes, the professor told students “being a journalist sucks,” according to Passmore.

“Between writing, myself, and reading about all the struggles journalists went through, I thought, man, maybe I don’t want to do this,” he said. “So I looked into doing emphasis in Communications.”

During research into other possible careers, Passmore came across political science. It was something he didn’t know much about but always had an interest in. He began to spend free time every week sitting in Michael Lyons’s lectures just to get a better idea of what he would be getting himself into.

“When I talk to people, I think a lot of them think I had this big plan from the beginning of what I wanted to do in college and what I wanted to be,” Passmore said. “Truth be told, everything I’ve done I’ve done because it sounded fun. I never had a plan, but I did what I thought I would enjoy.”

This is how Passmore met Cathy Bullock, the interim department head for Journalism and Communications.

“I hired Dillan as my UTF because he struck me as smart and dependable,” Bullock said. “He’s a thinker, quiet, but the wheels are always turning. I knew he’d be an effective, caring Undergraduate Teaching Fellow. I was right, and I was fortunate to convince him to work with me.”

That wasn’t all. Passmore also worked with Bullock on two research projects, one of which he studied media coverage of sexual assaults in Utah. After picking up Political Science as a second major, Passmore got into data analytics and statistics.

“In terms of professors that have influenced me and helped me, Bullock is the reason I am the way I am,” he said. “She’s an amazing lady who really influenced my life.”

This past fall, Passmore assisted Bullock as the editor of Aggie BluePrint. Although they were only able to get out one edition before COVID-19 struck, Passmore has been working hard to make sure the magazine can continue after his graduation and Bullock’s retirement.

“Dillan’s work through Aggie BluePrint, a student-initiated, student-run magazine, is one way he made his mark at Utah State,” Bullock said. “Aggie BluePrint is a student voice speaking up on campus. The more of that we see, the stronger I think the campus will be.”

Despite his reconsiderations about being a journalist, Passmore said he did enjoy writing. While spending the summer as an intern in Washington D.C. doing data analytics for the National Endowment of Humanities, Passmore made a mark on his roommate, Jared Worwood.

“I could tell from the get-go that Dillan was a ‘one of a kind person,’” Worwood said.

And then the two came up with an idea for a satirical website specifically catered for Utah State.

“This started out as a joke,” said Passmore. “Honestly, I was a little upset with The Utah Statesman, and I wrote this letter of ways to improve the paper. I said it should have a satire column, but I never gave this letter to anyone.”

Instead, Passmore suggested the two could start their own version, which Worwood was all for.

“We were joking around about it and decided that it would be really fun,” he said. “So we designed a website, got a whole bunch of writers together, and made it happen.”

Thus The Utah Bull was born in the summer of 2018. To date, it has produced more than 150 pieces, some of which got thousands of views. One got more than 10,000 people to visit the site, alone.

“We ended up writing an entire club charter and constitution at 2 a.m. in the morning,” Worwood said. “After making what would probably be the silliest club proposal in the history of USU, Dillan decided that The Utah Bull actually needed to be independent of USU’s clubs in order to retain its satirical integrity.”

Though Worwood said a lot of individuals who started out writing for the Utah Bull eventually lost their drive or got too busy — himself included — “Dillan kept it alive and going.”

Although the number of posts has decreased over the years, Passmore has plans to make sure it stays around.

“It’s been interesting seeing what people like reading. It started as a joke but actually turned into this really awesome thing,” Passmore said. “I mean, 10,000 people are reading stuff we write. It’s really cool.”

Amidst the club brainstorming, editing for Aggie BluePrint and not one, but two D.C. internships, Passmore was the vice-chairperson for the USU chapter of the College Republican National Committee and spent two years as a Resident Assistant for Merrill Hall.

Carter Harrison, who not only served with Passmore in D.C. but also knew him from College Republicans, said Passmore was crucial in rebuilding membership in the group over the past two years.

“Everyone who knows Dillan is better off because they’ve met him,” Harrison said. “I was appreciative of his role in helping the group focus on values and principles, rather than default combative political discourse like they often do in today’s climate.”

Harrison added that Passmore never let a person’s differences stop him from being kind or helpful. He was open-minded, a trait that he not only showed in CR but also his time as an RA. In the beginning, he only applied because he needed a job, but Passmore knew as soon as he was put on the alternate list, only to be called a few months later, that the experience would leave an impact on him.

“I got to know a lot of my residents really well and liked to think I was able to help them in some ways,” he said. “I don’t think I was life-changing, but I wanted to help in little ways of answering questions like ‘oh, where is this building, or how do I apply for a scholarship?’ At the end of the day, I want to help people and help their lives be better.”

This was something Passmore was able to do in every organization he participated in.

“Despite all of the energy and passion that Dillan pours into his academic and extracurricular life, he somehow still makes time to invest in others,” said Worwood. “Dillan is always finding ways to include individuals who were different or quirky. He is good at creating a safe space where people can feel useful, special, and accepted. I feel very blessed to have been his friend, roommate, and brainstorming buddy.”

Although his last semester at USU was cut short, Passmore has allowed himself plenty of time to reflect on his academic career. He went through many failures and plenty of rejection but never let it get to him. His advice to incoming students is to reach out and seek opportunities, rather than waiting for them.

“I learned throughout my time at USU that if I waited for opportunities to come to me, whether or not I thought I was qualified, I would have missed out on a lot of things,” he said. “There have been several times I’ve reached out even though I knew I wasn’t the most qualified. Sometimes doors open. Find opportunities to be involved and build your experiences. Don’t be scared of rejection.”

Passmore will be attending the J. Reuben Clark Law School at Brigham Young University in the fall, but he knows Utah State will stay with him as he said the people here are some of the nicest people he’s ever met.

“I’ll miss walking around campus and seeing how friendly people are. I’ll miss it when the bells of Old Main chime and I’ll miss how pretty the campus is especially in the spring and fall. It’s a gorgeous campus that has a real ambiance of the aggie family,” said Passmore. “I’ll never forget my time here.”

Although the future may be uncertain, one thing is for sure. The people who know Dillan Passmore will never forget his kindness and leadership.