This Sunday, March 23, water will flow to parched reaches of the Colorado River delta for the first time in decades, thanks to a hard-won five-year accord struck between the United States and Mexico.

The release from the Morelos Dam along the U.S.-Mexico border, just west of Yuma, Ariz., marks the opening experiment of a landmark 2012 addendum, known as Minute 319, to the 70-year-old U.S.-Mexico Water Treaty.

“Due to years of upstream diversion for irrigation and municipal water supplies, the delta has become more desert than riparian,” says Utah State University professor Jack Schmidt, who serves as head of the U.S. Geological Survey Grand Canyon Monitoring and Research Center in Flagstaff, Ariz. “The experimental release of water will be just a fraction of the river’s historic average and the hope is it will restore some of the native habitat. But that remains to be seen — whatever happens will be a surprise.”

The USGS is one of multiple entities involved in the restoration. Schmidt will observe the experimental release and he and his team will conduct field work to monitor its effects.

This is hardly Schmidt’s first rodeo. The USU geomorphologist was among the team of scientists that designed a series of controlled floods further upstream, starting in 1996, that flowed from Glen Canyon Dam through the Grand Canyon. Subsequent high-flow experiments, known as “HFEs,” were carried out in 2004 and 2008 and monitored by Schmidt and his students.

“The controlled flood from Morelos Dam, like those from Glen Canyon, is nowhere near as large as the typical spring floods of the pre-dam era,” Schmidt says. “But these experiments are one of the few practical approaches we can use to mitigate the effects of diversions and attempt restoration.”

The “pulse flow” of about 105,000 acre-feet of water from the Morelos Dam will continue for about eight weeks. Project scientists and delta residents have planted hundreds of native cottonwood and willow samplings ahead of the flood, which they hope will take root and survive. If successful, the restoration effort will replenish habitat for native fish and hundreds of migratory waterfowl species.

“It could go right, but much could go wrong,” Schmidt says. “Water could vanish into unexpected places and a hot summer could prevent native vegetation getting successfully established.”

In addition to the controlled flood, Minute 319 provides funding for repairs to the Mexicali Valley’s irrigation network, heavily damaged by the Easter 2010 earthquake. The agreement also allows Mexico to draw water from Lake Mead, if the reservoir reaches a specified level.

Originating from headwaters in the Rocky Mountains, the 1,500-mile-long Colorado River crosses the Colorado Plateau and winds southwesterly to Mexico’s Sea of Cortez. The river, which flows through some of North America’s most iconic scenery, is caught in a precarious tug-of-war between competing, unrelenting interests. More than 30 million people in the southwestern United States and another two million Mexican residents rely on the waterway and its tributaries for critical water and power.

“To restore a river, you have to have water,” Schmidt says. “Since the construction of dams, the Colorado River will never be the same. We need scientifically based efforts and cooperation to save what’s left.” 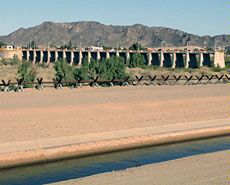 Morelos Dam, at the U.S.-Mexico border near Yuma, Ariz., is the site of a historic attempt, beginning March 23, to restore the Colorado River Delta. USU professor Jack Schmidt is among scientists involved in the project. Photo by John Fleck. 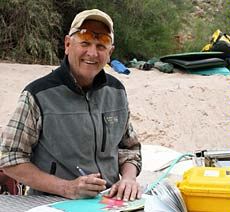