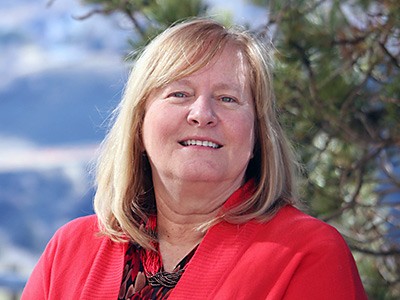 Maria Norton, a professor in the Family, Consumer, and Human Development Department within the Emma Eccles Jones College of Education and Human Services, led a USU research team that developed a revolutionary new smartphone app in conjunction with researchers at Ulster University in Belfast, Northern Ireland. The app could provide the key to preventing the onset of Alzheimer's disease.

A revolutionary new smartphone app, developed by researchers at Utah State University and Ulster University in Belfast, Northern Ireland, could provide the key to preventing the onset of Alzheimer’s disease.

Unveiled at the world’s largest convention for Alzheimer’s research in Washington, D.C., July 18, the Gray Matters smartphone app encourages individuals to set lifestyle goals, ranging from exercise and nutrition to stress management and brain stimulation — all of which are known to have an impact on the onset and progression of Alzheimer’s disease.

The Gray Matters app is currently being used for research purposes only, however, the plan is to make it available to the general public in the future.

The research supporting the app’s development came through the Gray Matters study at Utah State University. It was led by Maria Norton, a professor in the Family, Consumer, and Human Development Department within the Emma Eccles Jones College of Education and Human Services.

The app provides daily facts on the link between healthy lifestyle behaviors and improved cognitive wellbeing. Through the app, users can track their lifestyle across a range of areas, including diet, physical activity, mental well-being and social engagement. It also provides visual progress reports to help individuals be more aware of their general health and encourage healthy changes in behavior.

“Over the six month intervention period, improved diet and increased physical activity were linked with improved health,” said Dr. Norton. “This included decreases in blood pressure and inflammation, and increases in HDL (good) cholesterol levels, among those at higher cardiovascular risk.

“The incidence of Alzheimer’s disease is increasing worldwide. With no known cure, it is imperative that people understand modifiable risk factors for cognitive decline and take steps to protect their brain health in their younger years.”

“Ulster University’s world-leading research in assistive technologies is not only helping to solve challenges faced by people already living with Alzheimer’s disease, but it is also creating pioneering technology that is improving prevention strategies,” Nugent said.

“Making positive adjustments to lifestyle can significantly reduce the risk of Alzheimer’s disease, and our research findings show that Gray Matters both educates and empowers users to make these changes. We are now working closely with Utah State University to identify partnerships to further enhance functionality and usage of the app.”

The app will also support continued research by collecting data from participants.

The research is being undertaken at Ulster University’s Computer Science Research Institute and Utah State University’s Center for Epidemiologic Studies.

Further information on the Gray Matters app can be found at the website. 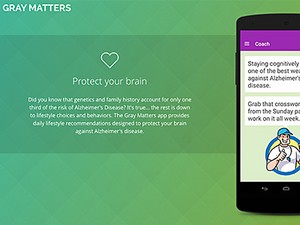 A screenshot of the Gray Matters app. 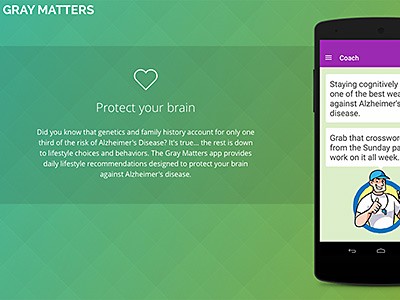 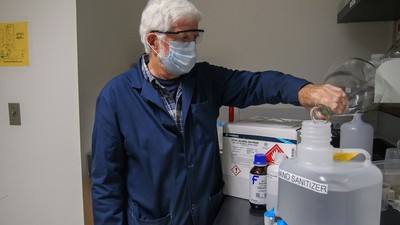