Prized for their pelts, North American beavers were nearly hunted to extinction by the late 19th century. Still viewed as a nuisance by many, the big-toothed rodents are emerging as partners in efforts to restore declining stream ecosystems affected by climate change.

“Since the arrival of European settlers, many streams throughout the West have become incised — meaning their beds have been lowered by erosion — and the habitat they provide has subsequently degraded,” says Joe Wheaton, assistant professor in Utah State University’s Department of Watershed Sciences and the USU Ecology Center. “As incised streams are disconnected from floodplains and tend to be deep ditches with homogenous habitat, they are generally considered poor habitat for fish, plants and other wildlife.”

A solution, he says, is help from nature’s engineer: the ingenious beaver. With colleagues Michael Pollock, Chris Jordan and Tim Beechie from the National Oceanic and Atmospheric Administration’s Northwest Fisheries Science Center in Seattle, Wheaton and USU colleague Nick Bouwes, as well as scientists from South Fork Research and Eco Logical Research, published findings on use of beaver dams for stream ecosystem restoration in the March 2014 online Advance Access issue of BioScience, journal of the American Institute of Biological Sciences. The research is supported by NOAA, NWFSC and the Bonneville Power Administration.

“Incised stream ecosystems can recover naturally, but the process may take centuries to millennia,” says Wheaton, director of the USU Ecogeomorphology and Topographic Analysis Lab, known as “ET-AL.” “When dealing with species like Steelhead that are listed under the Endangered Species Act, we simply may not be able to afford to wait for recovery.”

Conventional attempts to restore these systems require use of heavy, mechanical equipment, he says, and methods that are intrusive and expensive to implement over long reaches of rivers and streams.

“Beavers do a much better job than we do, and have a much longer track record of river engineering,” Wheaton says. “Using beaver dams or beaver dam analogues, we can pursue a less obtrusive and much cheaper alternative restoration process that relies on working with physical processes as well as exploiting ecological processes.”

The result is accelerated, and more cost-effective, recovery of incised streams with rapid improvements in the quality and complexity of instream and riparian habitat.

While studying beavers, Wheaton and his colleagues developed a beaver planning tool called BRAT (Beaver Restoration and Assessment Tool that is currently being implemented with support from the Utah Division of Wildlife Resources across the entire state of Utah.

“Beavers are not the solution everywhere, but the tool helps develop realistic expectations about where they may be able to help,” he says.

Wheaton’s graduate student, Reid Camp, in partnership with Brian Greene and Nancy Mesner of USU Water Quality Extension, developed a monitoring application to allow users to record information about signs of beaver activity in streams and rivers. The app runs on any iOS device and is free and available for download on Water Quality Extension’s Utah Water Watch website.

“Researchers, resource managers and citizen scientists can use the app to assess the potential for beaver as a stream conservation and restoration tool,” Wheaton says. “The collected data also helps us improve our BRAT models.”

The practice of beaver monitoring and use of beavers in restoration is gaining ground. Colorado citizen scientist Sherri Tippie, who works closely with Wheaton’s colleagues at Grand Canyon Trust, is featured in the newly released Nature program, “Leave it to Beavers,” which premiered May 14, 2014, on PBS.

“Today, beavers are an under-appreciated resource,” Wheaton says. “But, ironically, this stubborn, little mammal we once pushed to the brink of extinction may be a key to solving seemingly intractable challenges we face — especially here in the arid West — as we try to manage our dwindling water resources.” 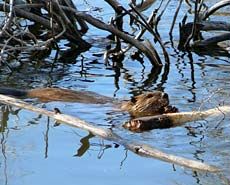 Once pushed to the brink of extinction following European settlement, beavers may be a key to helping people of the West manage dwindling water resources. Photo by Cadel Wheaton. 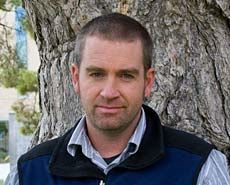 Joe Wheaton is an assistant professor in USU's Department of Watershed Sciences and the USU Ecology Center. He and colleagues published research on use of beavers for stream restoration in a recent issue of 'BioScience.’