In the early 1900s, Utah State was considered the West Point of the West, placing more Reserved Officer Training Corps cadets into the Army than other universities, said Zach Smith, a recruiter for the Army ROTC.

The main mission for the AFROTC is to develop future leaders for the Air Force, said Lt. Col. Alex Dubovik, commander of the Air Force ROTC detachment and aerospace studies department head.

The AFROTC said their detachment at USU is relatively large.

“There are 90 cadets in the program, six of which are female,” Dubovik said.

“I want people to come in and do their best at every task they are given,” Dubovik said.

“The most beneficial part is that juniors and seniors learn key leadership skills and are afforded the opportunity to reflect on what they did right or wrong and what they can improve on,” he said. “They get to make mistakes and learn from them in a controlled environment prior to heading out into the real Air Force.”

Dubovik said what cadets learn in the AFROTC will benefit them in the Air Force.

“It instills the skills they will use in the Air Force,” he said. “Depending on the job they get, many may supervise 100 or more people shortly after graduation."

Some common misconceptions are that those in the ROTC program have no social life, they can’t get an AFROTC scholarship unless they have a financial need, they have no money, have drill sergeants yelling at them, are committed to serving in the Air Force until retirement, they have to be pilots and they must shave their heads, Dubovik said.

“I think they do have a social life which sometimes includes fun activities organized by the cadet corps, such as the escape and evasion exercises,” he said.

Additionally, financial need isn’t considered when awarding scholarships. There may be yelling when they attend field training, but that’s about the extent of their boot camp experience. There’s no requirement to remain in the Air Force until retirement. They serve their contracted active duty service commitment, which is determined by the job they receive. The majority of those in the program and in the Air Force are not pilots.  Lastly, cadets don’t have to shave their heads or wear their uniforms every day, he said.

Cadets are expected to be motivated, disciplined and display a willingness to improve and help others to improve, Dubovik said. He said they need an ability to adapt to a military thought process and culture and are also expected to be good citizens and good neighbors.

“I love what we do, I love our Air Force community and I’m proud of what we do around the world on behalf of the American people and our allies,” he said.

There are both similarities and differences between the Air Force and Army.

“Everyone who graduates from AFROTC is commissioned in the rank of second lieutenant and enters into active duty service,” Dubovik said. “In the Army they receive the same rank, but entry into active duty is a competitive process where the top candidates are selected for active duty and the remainder enters the National Guard or the (Army) Reserves. Army cadets can also choose the Guard or Reserve over active duty if desired.”

When looking for recruits for the Army, recruiters look for more than the physically able or the intelligent.

“We look for those that want to be in the Army,” Smith said. “Those that have been joining want to be here.”

Recruiters have a goal every year of how many to contract. There are about 12-15 recruits a year in the Army ROTC.

“We recruit on campus, Snow College, robotics, anybody in high school or college,” Smith said.

“If you join the Army, you’re not going to die,” Smith said. “It’s actually pretty rare. It doesn’t limit your freedom. There’s no debt, and it’s a good job. It’s just like any other job. You don’t get yelled at a lot, but more than any other profession.”

The ROTC puts more people in the Army than the Air Force does. There are 19 people in either the National Guard or active duty, Smith said.

“We give cadets options to go to airborne, air assault and mountain warfare schools or cultural understanding language program,” he said.

The purpose of the Army ROTC is to develop leaders. The class, called Foundations in Leadership, is available for all students whether they're part of the program or not, Smith said.

There is a rivalry between the AFROTC and the Army ROTC, said Dustin Flores, a senior in English education and in the Army ROTC program.

“We’re better than the Air Force,” he said.

Flores was in prior service before coming to USU. The Army buttered it up and he joined, but he later learned about leadership.

“There is a good family setting here. It is really unified. We celebrate together,” Flores said.

Flores is currently a cadet commander.

“I oversee what goes on in training,” he said. “I make sure they do what they need to do.”

Flores has been commissioned as an officer in the Utah National Guard for six years after graduation. Some cadets, however, go into active duty.

“The ROTC gave me a lot of guidance,” he said. “You not only learn how to be a leader and manager but learn how to organize. We get real-life skills because we are so hands-on in our training.” 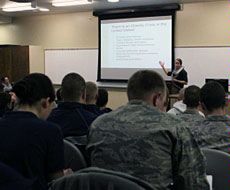 Cadets from the ROTC listen as their instructor lectures in a leadership laboratory class. Students said they receive hands-on experience through the program. (Ashlee Flygare photo from the USU Statesman Online)