If you leapt into space without the benefit of a spacesuit, things would get ugly fast.

Your blood and body fluids would boil, then freeze. While being pummeled by speeding rock particles and possible space junk, you’d swell up like a balloon as your skin and internal organs rapidly expanded. Mercifully, you’d lose consciousness within seconds from lack of oxygen.

“Space is a dangerous place,” says Peterson, a USU Undergraduate Research Fellow. “Spacesuit and spacecraft design is fascinating because they are so many things you have to think about.”

Peterson is among a group of USU students that presented to Utah legislators Jan. 31 during the state’s 2013 Undergraduate Research Day on Capitol Hill in Salt Lake City. In the Capitol Rotunda, the Sandy, Utah, native displayed a small sample of mylar — a common spacesuit material — that flew on the outside of the International Space Station for 18 months and took a punishing blow from a micrometeoroid.

The sample Peterson is studying is one of a group of samples from a USU experiment delivered to the ISS aboard Space Shuttle Endeavour in March 2008. The experiment was part of ‘SUSpECS’ — short for “State of Utah Space Environment and Contamination Study.” SUSpECS is part of a larger NASA study called Materials International Space Station Experiment or “MISSE” aimed at finding material suitable for crafting future space vehicles and instruments.

Peterson’s sample is about the size of a dime. She says the tiny sample’s mishap in space is sobering because an astronaut makes a much bigger and more likely target.

“I calculated the probability of a human being hit by a micrometeoroid as twice that of my mylar sample,” she says.

In the lab, Peterson is trying to simulate the ultraviolet radiation of the space environment and determine when, in the sample’s cosmic journey, it was struck. The undergrad has constructed a powerful UV lamp with an elliptical reflector, which she operates with a welding mask, to see how the radiation affects mylar samples without atmospheric protection.

From MISSE-initated studies such as Peterson’s, NASA is trying to find the best materials for increasingly long space missions.

“We’re talking spacecraft and instruments that will travel for decades,” says Peterson, a 2011 graduate of Utah’s Itineris Early College High School and a New Century Scholar. “It’s a tremendous challenge and a new level of thought.” 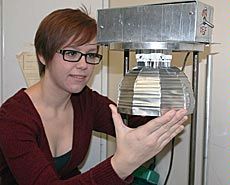 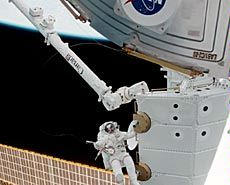 Canadian astronaut Chris Hadfield on a 2001 spacewalk outside the International Space Station. Aggie researcher Kelby Peterson is studying a material sample from a NASA-funded USU experiment that flew outside the ISS for 18 months. NASA photo.