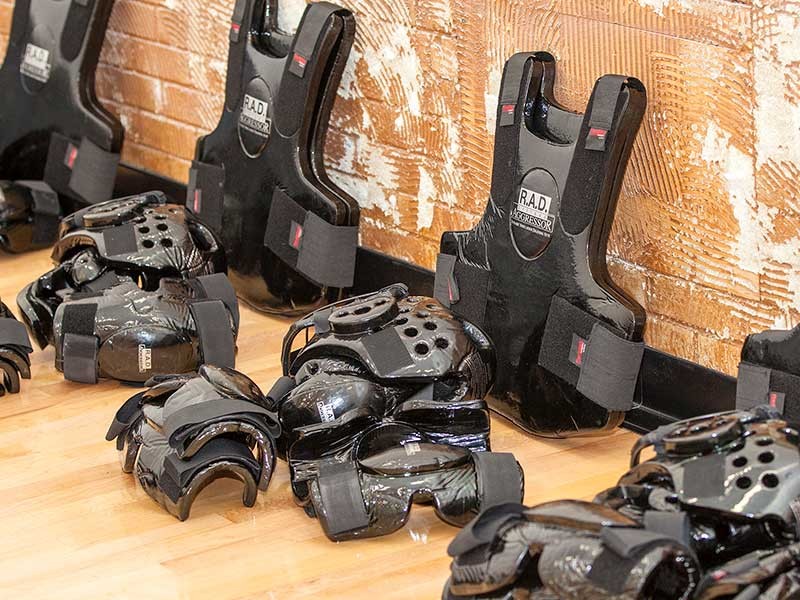 At the end of December 2017, Utah State University’s Digital Folklore Project named #metoo as the digital trend of the year. Unless you have lived under a rock all year, this won’t surprise you. But this surge in awareness about sexual assault and harassment begs the question, how do we make the future safer?

USU’s sexual misconduct prevention efforts include a combination of education about consent, awareness of sexual assault and a bystander intervention program called “Upstanding.” While USU views prevention as a community responsibility, it’s not surprising that many women want to know what more they can do to reduce their risk of becoming a victim. Enter R.A.D. – or Rape Aggression Defense – a class that teaches basic self-defense through lecture, discussion and the practice of physical techniques.

At USU, R.A.D. is a 1-credit PE course offered by certified instructors from USU Police. The class meets twice weekly, once for a lecture period and once for a day in the gym to learn physical skills. Though they offer several sections every semester, there is almost always a waiting list.

A reoccurring theme when talking to those involved in R.A.D. is empowerment, the idea that women have the power and capacity to defend themselves and challenge the social constructs that devalue women and encourage or excuse men’s aggression.

“I like seeing women empowered,” says Sergeant Jessica Vahsholtz, who has taught the course for 13 years. She talks to me as she watches students, all female, trickle into the gym for their final day of the semester. The students will run through a series of simulations, including one with multiple aggressors.

Sergeant Joe Huish, who has taught R.A.D. courses since USU started the program 18 years ago, added that the students’ increased confidence spills over into their lives.

“I used to say to students that I hope you never have to use what you learn here,” Sergeant Huish said. “But now I think that every person who takes this class will use what they learn, probably – we hope – not due to a physical attack, but in feeling more comfortable and secure in their daily life and activities.”

While four USU Police officers gear up in 50 pounds of padding to act as the “aggressors” for the simulation, students form a circle and, led by Sergeant Vahsholtz, begin a series of kicks and punches to warm up. Shouts of “NO!” fill the room for the next 10 minutes, reminding the observers that self-defense is verbal, not just physical.

“It’s very rewarding for us,” says USU Police Officer Jason Ostermiller as he suits up to be one of the aggressors. He says he is happy to give students a chance to practice skills, practice that often leaves him and the other aggressors feeling pretty sore.

Students range from freshman to seniors. Some say they signed up for the class because it sounded fun. First-year student Melissa Beacham chose the class because she wanted to take a PE credit each semester. Not new to self-defense techniques, Beacham said she loves the class, and that it teaches skills, such as ground self-defense, that are not taught in other such courses.

For their final simulation, female students don their own helmets and padding, then line-up for their chance to work with Ostermiller and his fellow officers. More cries of “NO!” are joined by sounds of students kicking and punching the officers in their protective suits. This time the shouts are fueled by adrenaline, as well as cheers of encouragement from the other students and observers. One of those boisterous observers is USU’s new chief of police, Mike Kuehn. He high-fives a student as she finishes her simulation, offering praise, while the sound of one particularly well-landed kick by the next student fills the air, followed by a few empathetic groans.

Self-defense programs are sometimes criticized for focusing too much on assaults perpetrated by strangers, a much rarer occurrence than assaults by an assailant the victim knows. In USU’s 2017 survey on sexual misconduct, 90 percent of students who had experienced sexual assault said the assailant was an acquaintance, first date, romantic partner or otherwise already known to them.

Sergeant Vahsholtz agrees that self-defense has to translate to situations in which the assailant is known to the victim.

“We talk about healthy relationships and the signs that signal a relationship is abuse or could become that way,” she said. “We talk about how, if there is going to be an assault, it will likely be someone you know. That could be a friend, your boyfriend or even your husband.”

The lecture portion of the class offers a way for instructors to talk about what happens when a rape occurs, from how students can assess resources and help through USU’s Sexual Assault and Anti-Violence Information office and file a report or access services through the Title IX office, to how police officers approach the crime and how sex offenses are prosecuted in the courts.
Students who take the course are presumably well-prepared to help a fellow student or friend who might become a victim.

Sergeant Vahsholtz says there are survivors of assault who take the class as well. Sometimes they disclose a sexual assault, and sometimes they don’t, but it is up to them to decide what parts of the class they participate in. For example, some survivors may feel uncomfortable with the simulation portion of the class, but the lecture and skills practice could be a good first step in rediscovering self-empowerment.

Jenny Erazo, SAAVI’s director, says “Those who have experienced an assault may feel a lot of anxiety about their safety. R.A.D. can help them build the skills and confidence they need to feel safer.”

And creating a safer future for themselves and others is the whole point.

USU Police also offer R.A.D. upon request as a short training or workshop. To learn more or request a class, contact the police department at 435-797-1939. 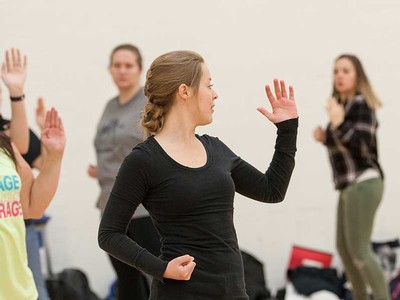 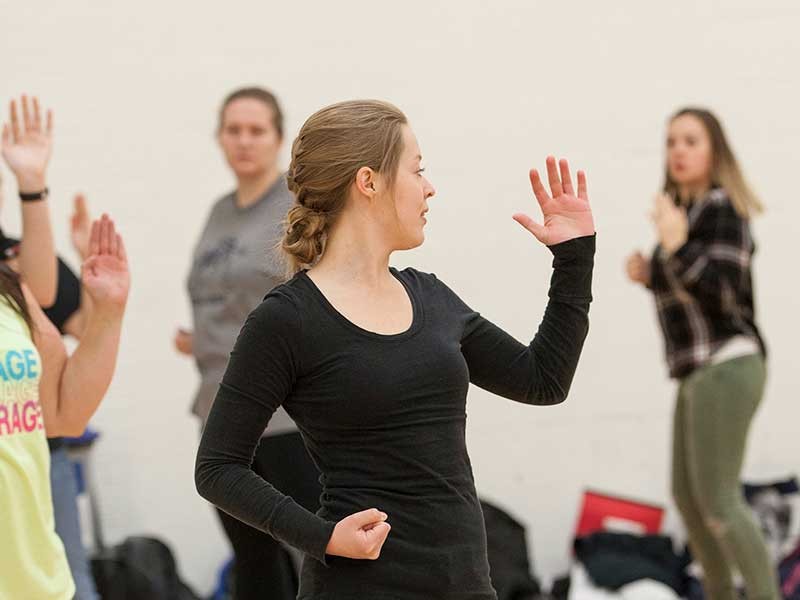 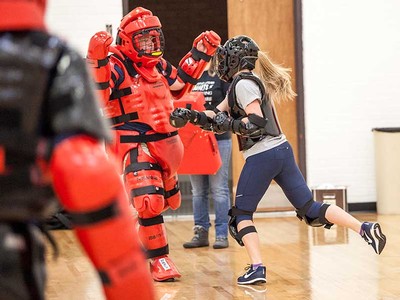 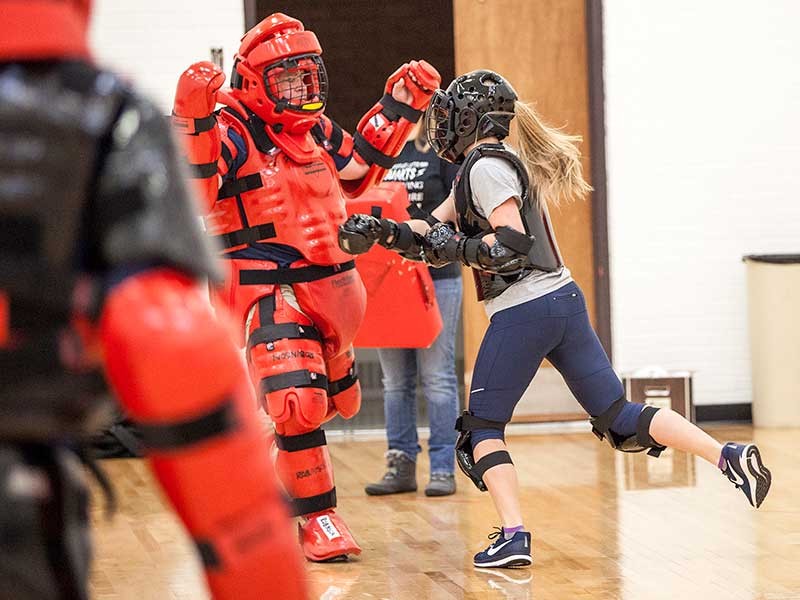 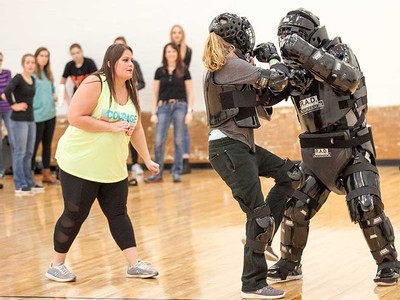 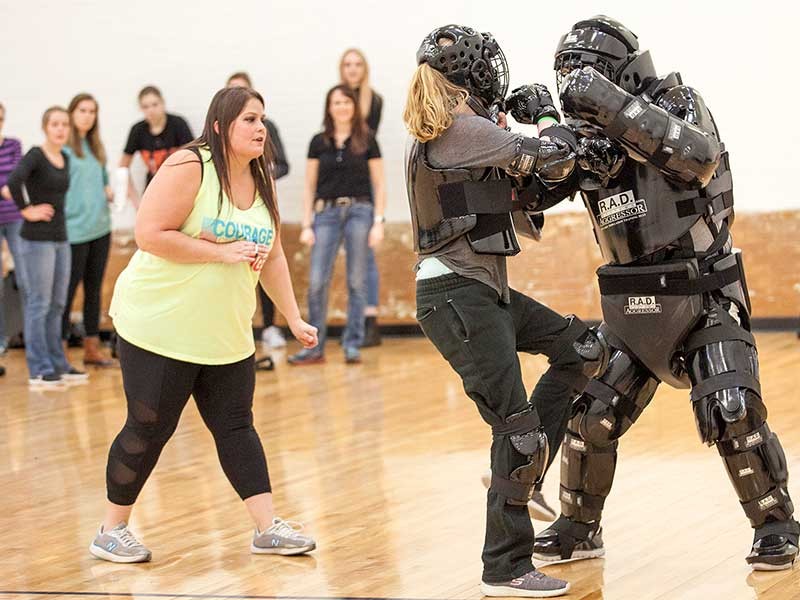