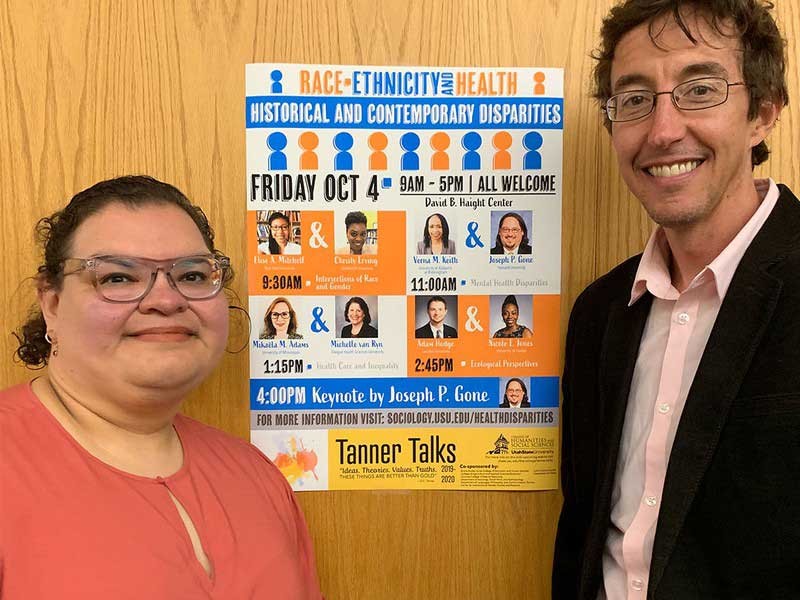 Assistant professor of Sociology Guadalupe Marquez-Velarde and Seth Archer, an assistant professor of History, will bring historians and sociologists to the table in a day-long seminar Oct. 4 titled "Race, Ethnicity and Health: Historical and Contemporary Disparities."

Health disparities have existed throughout history. There are inevitably some groups -- native people, for instance, or those who scratch for every dollar – who simply don’t get adequate care.

Historians analyze events and their consequences, said Seth Archer, an assistant professor of history whose research examines the diseases foreigners introduced to isolated Hawaii from 1778 to 1855. On the other hand, sociologists like assistant professor Guadalupe Marquez-Velarde research the demographics of today’s health care based on race and ethnicity.

But in a day-long seminar next week, which is free and open to the public, historians and sociologists from around the country will sit down together to share ideas.

“Race, Ethnicity and Health: Historical and Contemporary Disparities” begins at 9 a.m. Friday, Oct. 4, and continues through 5 p.m. at the David B. Haight Center (formerly the Alumni House). The day will be filled with panel discussions and keynoted with an afternoon presentation. The seminar is part of the Tanner Talks series in the College of Humanities and Social Sciences funded by the O.C. Tanner Foundation.

“We'll talk to each other,” said Archer, “and learn about the overall legacy of health disparities in this country from early times to the present.”

Archer and Marquez-Velarde said they were surprised at the interest shown from all corners of the university. The enthusiasm is shared not just by those in the humanities, but by health scholars in the Emma Eccles Jones College of Education and Human Services, as well as those in the College of Agriculture and Applied Sciences who, noted Archer, study nutrition, a key aspect of health. Plus, he added, “they want to figure out how to feed Utah’s population.”

The keynote speaker at noon is Joseph Gone, faculty director of Harvard University’s Native American Program, a professor of anthropology, and a professor of global health and social medicine at Harvard Medical School. Gone, said Archer, is the “glue that provides a bridge between the social scientists and historians.”

Gone is a clinical psychologist who has long researched today’s issue of mental health among Native Americans, but was drawn into the question of historical trauma. As a result, said Archer, Gone is “a social scientist who also studies and understands the past.” The scholar, a member of the Gros Ventre Tribe of Montana, will speak on “American Indian Healing Traditions: Historical Shifts in Therapeutic Practices.”

The seminar includes such panels as “Mental Health Disparities,” “Ecological Perspectives” and “Health Care and Inequality.”

The presenters’ list is made up three sociologists and three historians, as well as a professor from the Oregon Health and Science University whose specialty is actual health services. Panel presenters include University of Mississippi historian Mikaela Adams, author of Who Belongs? Race, Resources, and Tribal Citizenship in the Native South (Oxford, 2016) and sociologist Christy Erving of Vanderbilt University, a researcher of how stress and other factors contribute to the joint occurrence of mental and physical issues in marginalized communities.

Among other visiting scholars is Elise Mitchell of New York University who studies forced vaccination of enslaved people in colonial America and the Caribbean, and Adam Hodge, a researcher of smallpox epidemics on the Great Plains in the 19th century.

The collaboration between historian Archer and sociologist Marquez-Velarde, both new faculty in 2018, came at the prompting of CHaSS Dean Joseph Ward. The result has been inspiring for both.

“I've never really done interdisciplinary work,” said Archer, “and I've never collaborated with a scholar outside of my field. I've already learned a lot from Guadalupe.”

Marquez-Velarde’s research is largely quantitative and data driven, while Archer’s is purely qualitative.

There’s “a lot of lip service” paid to cross-disciplinary or interdisciplinary work in university culture, said Archer.  “But it doesn't happen as much as you think. I give Dean Ward a lot of credit for setting this up and actually getting people from different fields to talk to one another. It's been great.”

No pre-registration is required. For a full list of panel discussions and biographies of presenters, visit https://sociology.usu.edu/healthdisparities/.