Most motorists can offer a deer-in-the-headlights story, in which they’ve been forced to hit the brakes, swerve or survey the damage of a sudden, white-knuckle encounter with wildlife in the roadway.

Utah State University researchers are exploring solutions to make the nation’s four million miles of roaded landscape safer for all creatures – human and beast.
Wildlife-vehicle collisions account for an average of 200 human deaths in the United States each year, says Patricia Cramer, a research ecologist with USU’s Department of Wildland Resources. Nonhuman vertebrates fare much worse. According to research published by Wildland Resources professor Michael Conover, more than a million die on American roads each day.
Beyond mortality, each mile of pavement signals destruction and fragmentation of wildlife habitat, Cramer says. For most animals, roads mean reduced access to water, food, mates and protective habitat.
“This is a much more complex problem than some roadkill here and there,” she says. “Roads can impact critical ecological processes and influence the demographics and evolution of animals and plants.”
Cramer and colleague John Bissonette, professor in the Department of Wildland Resources and unit leader with the U.S. Geological Survey Utah Cooperative Fish and Wildlife Research Unit, recently completed a three-year study to evaluate the use and effectiveness of wildlife crossings in the United States and Canada. The project, which includes the efforts of student researchers and team members from governmental agencies and other universities, was funded by the National Cooperative Highway Research Program of the National Academies of Science and Engineering’s Transportation Research Board.
As part of the project, the researchers conducted an exhaustive survey of efforts by transportation and wildlife officials in the United States and Canada to determine what measures state and provincial agencies are conducting to mitigate wildlife-vehicle collisions.
“What we’ve discovered is some states and provinces are using innovative measures, such as construction of wildlife passages, and others aren’t taking much action,” Cramer says.
Conventional tools, such as yellow warning signs, that warn motorists of areas prone to wildlife crossing, have minimal impact, says Bissonette, principal investigator on the project. “Motorists simply aren’t slowing down enough to prevent collisions,” he says.
New pavement-level animal crossings, such as those near Park City, Utah, are also ineffective, Bissonette says. “They simply do not work. The traffic volume is too great and the speeds are too high.”
What is working, the researchers say, are animal overpasses and underpasses that keep wildlife out of harm’s way. Such solutions may seem costly, but Bissonette argues they’re worth it. “Construction of a specially designed overpass or underpass is a sizable investment,” he says. “But if you amortize the cost of the investment against the cost of not doing it – and factor in human mortalities – I think that puts it into perspective.”
Bissonette and Cramer also note that the issue is much broader than concern for large mammals that cause highly destructive accidents. Obviously, a collision with an elk will put a bigger damper on your day than a bug splattering your windshield, they say, but all creatures great and small are impacted by impenetrable terrain.
“When approaching this problem and considering solutions you need to think about the permeability of the landscape,” Bissonette says. “We need to consider accessibility not only for deer and elk, but for smaller mammals, fish, birds, reptiles – even insects.”
Bissonette says conventional solutions have favored a “funnel” approach; that is, forcing wildlife into progressively narrower options for safe passage. “What we need to be doing is thinking of a “sieve” approach,” he says.
Solutions that accommodate a broad spectrum of species are needed, Cramer says. That bug on the windshield may seem an insignificant annoyance, but the decline of American bee populations and the corresponding impact on agriculture is not. So much so that the state of Washington posts reduced speed limits in alfalfa production areas during periods of pollination.
What the researchers have also gleaned from the study is that wildlife collision mitigation needs to begin at the start of the road-planning process. Cramer advises students preparing for careers in wildland management that they must be prepared to get involved in long-range roadway planning and offer environmentally friendly solutions. And she warns that the process could span their entire careers. “A single highway project may require 20 to 30 years of planning,” she says.
“Transportation projects are not ‘done deals,’” Cramer says. “Recent plans for highway construction in Wyoming and Ohio, for example, were altered to better accommodate wildlife.”
When scientifically sound, fiscally feasible alternatives are offered, she says, highway officials are ready to listen.
Contacts: John Bissonette, 435-797-2511, john.bissonette@usu.edu; Patricia Cramer, 435-797-1289; patricia.cramer@usu.edu
Writer: Mary-Ann Muffoletto, 435-797-3517, maryann.muffoletto@usu.edu
January 2008 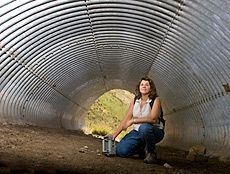