Joyce Kinkead, professor of English at Utah State University, became the first humanist named a Council on Undergraduate Research Fellow last summer. The award carries a $5,000 prize for student researchers at a fellow’s respective institution, awarded by the Brian Andreen Undergraduate Research Fund — the founder of the organization. For Kinkead, figuring out what to do with funding wasn’t too difficult.

“The CUR Fellow award not only honored my work, but it also allowed me to advance the cause of undergraduate research in my own department in meaningful ways,” she wrote in her CUR Fellow report. “Although I could certainly have used the funds to employ a research assistant on my current book project, I thought it would be more important to devise a path whereby my colleagues in the Department of English shared in the joy I have found in mentoring undergraduate researchers.”

Kinkead, the College of Humanities and Social Sciences’ 2013 Researcher of the Year, devised a call for proposals for student research projects with the five committee chairs of the various emphasis areas in the department. Students were awarded funding based upon feasibility and innovation of their scholarly or creative projects. Recipients partnered with a faculty mentor and used the funds to visit historic sites, research in archives, present at conferences and use as leverage to gain additional research funding.

For instance, Carlos Guadarrama — a first generation college student — used the support to investigate the defunct Intermountain Inter-Tribal Indian School in Brigham City. He examined the history of the campus and its folklore. From analyzing accounts of riots that occurred at the school in the 1970s, Guadarrama disproved a widely held belief that the school endured a three-day melee, prompting the school to eventually close.  He presented his findings at three different conferences, including Research on Capitol Hill in Salt Lake City.

“When I went to Capitol Hill in January I was really shy; by the time I finished with [Undergraduate Student] Showcase [at USU] in April I was really confident in my poster and confident talking to people about my research,” Guadarrama wrote about the project. “I like that my work makes others think of me differently.”

Tia Lee used her funding to launch a creative writing endeavor. She spent the 2012-13 academic year writing The Locksmith’s Apprentice, a fantasy novel for young adult audiences. Lee attends USU Eastern and is nearly finished with the manuscript, which entailed creating a new language for her characters. Lee’s work was accepted at the National Undergraduate Literature Conference at Weber State earlier this spring [2013].

“This has been a very eye-opening experience,” she wrote in her final report. “I had no idea there were so many avenues for me to pursue my creating writing on an academic level.”

Cambri McDonald, an American Studies major, received funding to explore her project “The Prostitute in Progressive Era Literature: Critiquing Social Reformers.” She presented a paper and applied for a USU Undergraduate Research and Creative Opportunities Grant to travel to New York City in July 2013 to continue her research. There she aims to establish connections between the novelist Stephen Crane and Jacob Riis, a police reporter for the former New York Tribune, and uncover more biographical information about author Edgar Fawcett. McDonald was named the department’s Undergraduate Researcher of the Year.

Freshman Jake Howard was relatively new to literary and historical research when he began his project examining the rhetorical arguments by Cherokee women on Indian removal policies in the 1800s. However, his efforts proved successful. Howard’s paper was accepted for presentation at the 2013 Western Social Science Association Conference. The experience showed him the breadth of research possibilities in the humanities, particularly interdisciplinary approaches.

Senior Joshua McDermott used the funds to travel to Palmyra, New York, and Kirtland, Ohio, to write a braided essay about his spiritual journey visiting historical sites of the Church of Jesus Christ of Latter-day Saints founder Joseph Smith. He aimed to gain a deeper understanding of Smith as a human being while tracing his footsteps and interviewing historians at the sites. McDermott delivered three oral presentations at Utah State about his work.

“CUR has been one of the best, and most useful, experiences I’ve had as an undergraduate,” he wrote. “It felt wonderful to have resources to undertake research I was interested in, and to explore a topic, through self-discipline, that I cared about.”

In April, the five student researchers reported on their projects during a special panel at the English Department’s Undergraduate Symposium. The department is exploring ways to continue supporting this level of funding for future undergraduate researchers.

“I could not be more thrilled with the outcome of these students’ projects,” Kinkead said. “They worked on diverse topics, and had excellent guidance from their faculty mentors.” 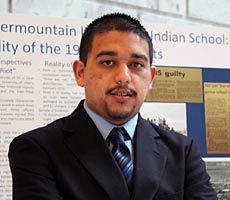 USU Department of English undergraduate researcher Carlos Guadarrama shared his research at a number of venues, including Utah's state capitol building during Research on Capitol Hill. 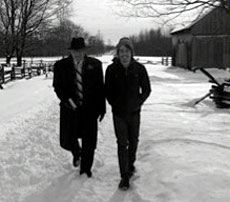 Undergraduate Joshua McDermott walks through the snowy countryside at Palmyra, New York, thanks to the research support he received. 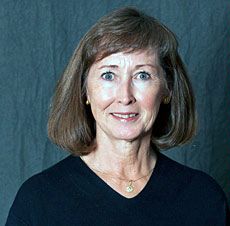