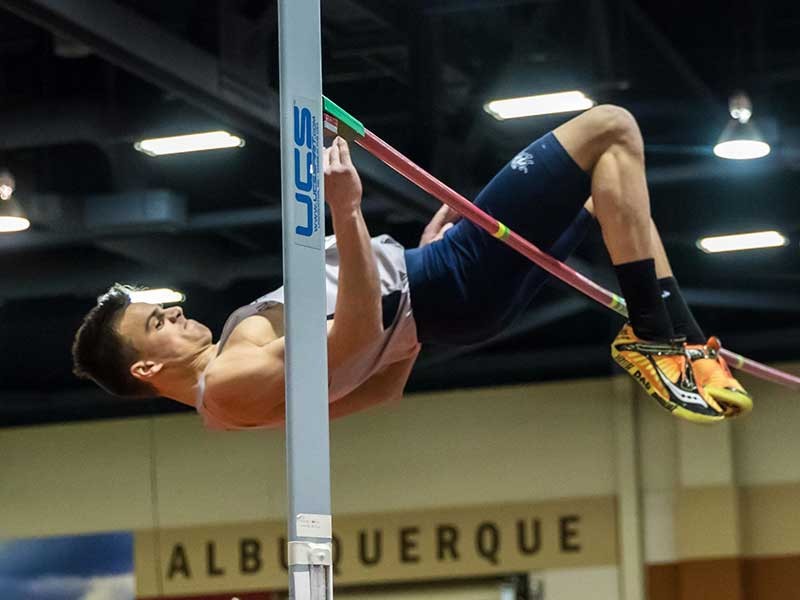 Highlighting the group is sophomore Hunter Simonsen, who won the high jump (2.18 meters/7-1.75) to earn all-conference honors. He was joined by freshman Chandler Obray (2.14 meters/7-00.25) and senior Leaugen Fray (2.10 meters/6-10.75), who also garnered an accolade in the high jump after their second and third-place finishes, respectively. Fray is now a three-time all-conference recipient in the long jump after he placed third in the event with a leap of 7.19 meters (23-07.25).

Junior Maia Garren earned all-conference honors as she set the school's indoor weight throw record with a personal-best heave of 19.49 meters (63-11.50). She was joined in all-MW honors by senior Brenn Flint, who placed third in the shot put with a season-best throw of 16.41 meters (53-10.25).

Rounding out the women's honors is sophomore Talie Bonds, who captured bronze in the women's pentathlon with a personal-best 3,762 points, which ranks fourth all-time in school history.

Senior Carl Jones Jr. captured third in the men's 60-meter dash with a time of 6.85, earning him his first all-conference honor.

In the field, junior Kyle Morris won the men's shot put with a personal-best heave of 18.38 meters (60-03.75), which ranks fourth all-time in school history, while sophomore Josh Barclay joined Morris by placing second with a mark of 17.13 meters (56-02.50). Senior Sam Nelson earned his second-career all-conference honor in the pole vault as he placed third with a height of 5.10 meters (16-08.75), while junior Kyle Brost also earned his second-career all-conference honor as he placed third in the triple jump with a leap of 14.81 meters (48-07.25).

Freshman Roman Ruiz placed third in the men's heptathlon with a personal-best 5,078 points, which ranks fifth all-time in school history, to round out USU's all-conference selections.