“This is a tremendous honor for these students and a tremendous honor for Utah State University,” says USU President Stan Albrecht. “This award is a testament to the exceptional achievements of these individuals in academics, research and service, as well as the outstanding mentorship by our faculty members.”

USU’s 2013 honorees, who represent the university’s College of Science, are members of the USU Honors Program and are active in undergraduate research. Both scholars also share their time and talent with fellow students as tutors and mentors.

“This year’s scholars are focused young scientists who demonstrate a commitment to academic excellence as well as service,” says Jim MacMahon, dean of USU’s College of Science. “We applaud their dedication and look forward to their continued achievements.”

Gish followed a road less traveled to USU: Upon completing high school studies at home, he headed to Europe for two years of volunteer service. After immersing himself in another culture and mastering Dutch, he returned to the United States, earned a GED, took the ACT and entered Utah State.

“Even though neither of my parents have a college degree, I knew I wanted to graduate from college,” says the West Jordan, Utah, native. “I’ve studied hard while having a job to finance school through every semester and summer.”

Getting involved in undergraduate research was also high on his list of priorities. During his freshmen year, Gish began working in the animal science microbiology and genetics lab of faculty mentor Clay Isom. He soon developed the skills to design his own research project, for which he secured funding, to test the effects of epigenetic drug compounds.

A subsequent research project with faculty mentor Alvan Hengge led Gish to a breakthrough experience that convinced him scientific research was something he wanted to do for the rest of his life.

“I ran into a discouraging road-block that took months to resolve,” he says. “Dr. Hengge helped me understand this is commonplace in science. Upon resolving the issue, I realized solving unexpected problems was something I enjoyed. Behind every discovery is the willingness to persevere and the excitement of finding a solution.”

Gish plans to pursue graduate studies in astro/nuclear chemistry or material science and a career in academia.

A nearly lifelong admirer of Einstein, Rozum has long been fascinated with physics. Math? Not so much. In his early studies, math was “nothing but tedious bookkeeping and a hurdle to overcome.”

But as his studies progressed at Utah’s InTech Collegiate High School, from which Rozum graduated in 2010, his interest grew.

“As my classes became more advanced and proof and derivation became the emphasis, I realized how much fun math could be,” says the Cache Valley, Utah, native. “I began to appreciate the development of theorems. I actually worked hard to forget the ones I’d learned so I could re-derive and re-motivate them.”

As an undergraduate researcher, Rozum has pursued work in atmospheric physics and astrophysics. He was a senior author of a presentation at the 2012 American Geophysical Union Fall Meeting; a significant honor for an undergraduate.

He credits his parents and grandparents with instilling his love of learning.

“My grandparents, who were both teachers, taught me knowledge counts for nothing if you keep it to yourself,” Rozum says. “I plan to pursue graduate study in physics and math and a career as a professor at a research university.” 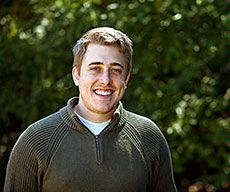 J. Tyler Gish, a chemistry and physics major at USU, is a 2013 Goldwater Scholar. 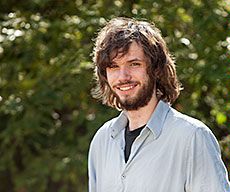 Jordan Rozum, a physics and mathematics major, is a 2013 Goldwater Scholar. He and Gish are the recipients of the prestigious award administered by the Barry M. Goldwater Scholarship and Excellence in Education Foundation.